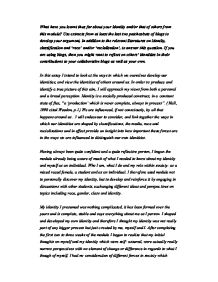 classifications and social identity What have you learnt thus far about your identity and/or that of others from this module? Use extracts from at least the last two

What have you learnt thus far about your identity and/or that of others from this module? Use extracts from at least the last two patches/sets of blogs to develop your argument, in addition to the relevant literatures on identity, classification and 'race' and/or 'racialisation', to answer this question. If you are using blogs, then you might want to reflect on others' identities in their contributions to your collaborative blogs as well as your own. In this essay I intend to look at the ways in which we ourselves develop our identities, and view the identities of others around us. In order to produce and identify a true picture of this aim, I will approach my views from both a personal and a broad perception. Identity is a socially produced construct, in a constant state of flux, "a 'production' which is never complete, always in process". (Hall, 1990 cited Weedon, p.1) We are influenced, if not consciously, by all that happens around us. I will endeavour to consider, and link together the ways in which our identities are shaped by classifications, the media, race and racialisations and in effect provide an insight into how important these forces are in the ways we are influenced to distinguish our own identities. Having always been quite confident and a quite reflective person, I began the module already being aware of much of what I needed to know about my identity and myself as an individual. Who I am, what I do and my role within society: as a mixed raced female, a student and as an individual. I therefore used module not to personally discover my identity, but to develop and reinforce it by engaging in discussions with other students, exchanging different ideas and perspectives on topics including race, gender, class and identity. My identity I presumed was nothing complicated, it has been formed over the years and is complete, stable and says everything about me as I person. ...read more.

For example I am aware that if I am attending a job interview my initiative automatically tells me to conform to adopt a formal, sophisticated manner and to attend the interview in smart clothes in order to carry this effect across to the interviewer. This would seem to fit my understanding of my own identity; however I do not feel my identity was Pre- determined and I 'fitted' in to a 'role'. To further add to this point, the particular identities I choose to take on are, in themselves, value laden and with meaning. They can be reworked as a result of my socialisation with others, and, as a result, are not Pre- determined as suggested by Berger and Luckmann (1966). I therefore feel that the way I classify myself is influenced by every aspect of society. Obviously I must internalise the meanings of what certain identities entail but these meanings themselves are socially constructed. Taking identity a step further I began to look into other contributing factors to my identity. I began to read upon and discuss race and racialisation and how it impacts our identities and the identities of those around us. I began to ask myself and consider questions such as consider what is meant by the concept of 'race' and the process of 'racialisation'? It was evident that there are current debates on the issue of the notion and understanding of race. The term race distinguishes one population from another. Widely used human racial categories are based on visible traits (especially skin colour and facial features), genes, and self-identification. Conceptions of race, as well as specific racial groupings, vary by culture and time and are often controversial due to their impact on social identity and identity politics, and many regard race as a social construct. Legal definitions, common usage, and scientific meaning can all be confounded, and care must be taken to note the context in which it is used. ...read more.

I didn't ware my hair down, not because I couldn't I actually didn't want to as I believed I would be classed as strange. My hair wasn't straight but like an afro- frizz ball. This is the name I was given from one of my friends the time I did ware my hair down. I thought I was different, but only now I no I was not different, I was unique. Whereas then I felt embarrassed of my black origin now I am proud. I should not have to conform to certain group norms or be ashamed of who I am. I think as a child I was somewhat confused about where my identity lay, but over time, through learning processes my identity did become more apparent and visible to me. Only now through doing this course, have I begun to again question my own identity. Things I have read in particular have brought back confusing memories and I can relate to some of the material I am reading having first hand experience of racism, in the sense that I have in my life been perceived as different from both white and black people. My identity is a learning process and will adapt and change over time as I go through different experiences and challenges which will adapt my initial thoughts, beliefs and attitudes on certain things. This course is one of the experiences I have encountered which has changed my perceptions. It has confused me in a way, but I feel this is a good thing as it has taught me not to be nieve and take things for granted. It has taught me to question things more and not be so exceptive of things that I believed before simply because it had been spoon fed to me from an early age. I can say that everything I have learned thus far about identities, classifications, race and racialisation has been an internal challenge and has certainly been an eye opener to me. ...read more.