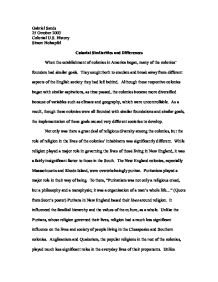 Gabriel Sands 25 October 2003 Colonial U.S. History Simon Holzapfel Colonial Similarities and Differences When the establishment of colonies in America began, many of the colonies' founders had similar goals. They sought both to emulate and break away from different aspects of the English society they had left behind. Although these respective colonies began with similar aspirations, as time passed, the colonies became more diversified because of variables such as climate and geography, which were uncontrollable. As a result, though these colonies were all founded with similar foundations and similar goals, the implementation of these goals caused very different societies to develop. Not only was there a great deal of religious diversity among the colonies, but the role of religion in the lives of the colonies' inhabitants was significantly different. While religion played a major role in governing the lives of those living in New England, it was a fairly insignificant factor to those in the South. The New England colonies, especially Massachusetts and Rhode Island, were overwhelmingly puritan. Puritanism played a major role in their way of being. To them, "Puritanism was not only a religious creed, but a philosophy and a metaphysic; it was a organization of a man's whole life..." (Quote from Scott's poster) ...read more.

Scarcity of land in the North effectively mandated this, whereas the great availability of land in the Chesapeake and South made marriage for love a feasible option. Finally, the basic familial structure was much different in the Southern colonies than in the North. Unlike in the North, in which a household was comprised of two parents and their children, families in the South were much more extended because of more remarriage after the death of a spouse, (which happened much more frequently in the South than in the North), and the plantation lifestyle. It was quite common for cousins, aunts, and uncles to live together. Differences in methodology regarding punishment and discipline in the North South, and Chesapeake regions were often the result of the different goals that the disciplinary measures were supposed to achieve. While the North, a much more religious society, focused on moral transgressions, the South, a society of large plantations and agriculture, focused on property crimes, deciding that they "no longer accepted the burden of serving as the arbiter of public morality." (Purvis, 307) Thus, these societies delegated severe punishments for different types of crimes, as some were of greater relevance in their cultures. The colonies of New Jersey and Pennsylvania, in which the Quakers had the predominant influence, were completely different from both the Southern and the Northern colonies. ...read more.

Slaves also became a much more significant part of Southern society and economy than in other regions. Due to the periodic influxes in the numbers of surplus slaves, the slave trade made the southern economy more prosperous. Thus, slaves became a symbol of status and power: slaves equated to wealth and therefore a greater role in Southern economy and society. Though each of the colonies had its own ideas and beliefs, the way in which they were run with regard to internal affairs was quite similar. Indeed, "amidst the differing foundations and establishments of government among the colonies, there was a sense of consistency in the way each colony conducted internal business." (Will and Sam's presentation) Simply put, "the role of these governmental entities may have differed from colony to colony, but essentially the functions of each were very similar." (Kross, 215) However, the effect of the similarities of internal governmental structure amongst the colonies, on the society and everyday life of each colony's inhabitants, is minimal when compared to that of the dissimilarities in religion, familial structure, methods of punishment, and trade. Although the governments of the colonies were founded on similar bases, it was these other factors that caused completely different societies to develop. The differences among the colonies are of greater significance than the similarities. ...read more.