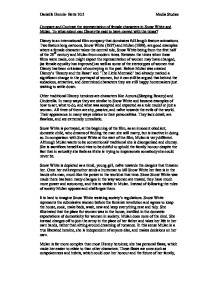 Compare and Contrast the representation of female characters in Snow White and Mulan. To what extent can Disney be said to have moved with the times?

Compare and Contrast the representation of female characters in Snow White and Mulan. To what extent can Disney be said to have moved with the times? Disney is an international film company that dominates full-length feature animations. Two feature long cartoons, Snow White (1937) and Mulan (1999), are good examples where a female character takes the central role, Snow White being from the first half of the 20th century and Mulan from modern times. Between the times when these films were made, one might expect the representation of women may have changed, (as female equality has improved) as well as some of the stereotypes of women that Disney has been criticised of conveying in the past. Before Mulan was created Disney's 'Beauty and the Beast' and 'The Little Mermaid' had already marked a significant change in the portrayal of women, but it can still be argued that behind the audacious, attractive, and determined characters they are still happy homemakers just waiting to settle down. Other traditional Disney heroines are characters like Aurora (Sleeping Beauty) and Cinderella. In many ways they are similar to Snow White and became examples of how to act, what to do, and what was accepted and expected as a role model or just a woman. All three of them are shy, passive, and na�ve towards the evils of the world. ...read more.

Many people may wish that their relationship could be this effortless, and flawless, but human reality would not tolerate it. Mulan isn't waiting for her prince to someday come; when he does arrive, having known her primarily as a man, and having learned to admire her for her deeper qualities, the romance is muted and subtle. One of the most striking features of the way parenthood is represented in Disney's more recent animations is the almost total absence of the mothers. Mothers are absent in far greater numbers than either fathers or mothers of the pre-Little Mermaid era. The maternal vacuum is breathtakingly absolute: With the single exception of Mulan, every single relevant major character of the recent Disney animations - Ariel, Belle, Aladdin and Jasmine, Pocahontas, Hercules, Tarzan and Jane- either loses his or her mother in infancy, or is permanently separated from her during or before childhood, or simply has no onscreen mother at all. Significantly, it's the heroines - Ariel, Belle, Jasmine, Pocahontas, Mulan, and Jane - who are almost invariably being raised by single fathers with no sign or mention of a mother or mother figure, ever. The heroine's motherless life serves to accentuate her own feminine virtues and independence, since her father is invariably either domineering, feeble, and/or ridiculous, and there is no "competing" feminine figure to suggest that the heroine needs any support or guidance. ...read more.

However, when considered with the society that created them, Disney movies fall in line with the sexual biases that exist in society. A child that watches Disney movies will be no more sexist than one that does not. In the end, all prejudices come from society as a whole and all children will be exposed to them, regardless of Disney. However, there are elements of Disney movies that can lead to the characterization that they impart sexist views on developing children. One of these elements is the timelessness of the movies. Compared to most forms of entertainment, Disney's animated works have remained very much in the public consciousness despite their age. A sexist society produces sexist entertainment, even for its children. The two qualities of Disney animation, its age and its stylization, make sexism much easier to see, and have resulted in much more criticism for Disney than for other companies producing entertainment for children. The fact that Disney movies are marketed toward children also increases concerns that they support sexism and for good reason. Society should not impart sexist views on its youth. And although Disney may encourage gender stereotyping it is by no means responsible for it. Disney has produced films that do show more modern views of gender, and there are definitely some qualities in Mulan that women should aspire to. Danielle Dennis- Betts 10.5 Media Studies ...read more.