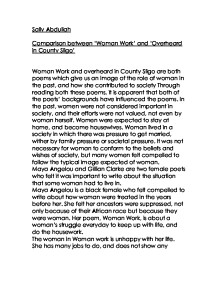 Comparison between 'Woman Work' and 'Overheard in County Sligo'

Sally Abdullah Comparison between 'Woman Work' and 'Overheard in County Sligo' Woman Work and overheard in County Sligo are both poems which give us an image of the role of woman in the past, and how she contributed to society Through reading both these poems, it is apparent that both of the poets' backgrounds have influenced the poems. In the past, women were not considered important in society, and their efforts were not valued, not even by woman herself. Women were expected to stay at home, and become housewives. Woman lived in a society in which there was pressure to get married, wither by family pressure or societal pressure. It was not necessary for woman to conform to the beliefs and wishes of society, but many women felt compelled to follow the typical image expected of woman. Maya Angelou and Gillian Clarke are two female poets who felt it was important to write about the situation that some woman had to live in. Maya Angelou is a black female who felt compelled to write about how woman were treated in the years before her. She felt her ancestors were suppressed, not only because of their African race but because they were woman. ...read more.

who is unhappy with her life, and could have freedon, if she wanted, but feels pressure from society to keep her life the way it is. The similarity between both the women in these poems is, even though one is rich and one is poor, they are both women who are unhappy, oppressed, and feel trapped by their lives. I think that even though the woman in 'Overheard in County Sligo' is richer, and may be more well-off than the woman in 'Woman Work', they are both unfortunate and have the same amount of pressure on them. I like both poems, but I prefer 'Woman Work' as I like the use of language and imagery in the last four verses. I like the lines 'Fall softly dewdrops and cover me with white' I think using nature at the end of the poem makes the poem better, as it emphasises all the lack of materialistic things she owns, and nature is all she has. I think the use of vocabulary is very good, and Maya Angelou has made the majority of the last four verses very peaceful. On the other hand, I like that 'Overheard in County Sligo starts off with an overview of a woman, who, on the surface, has the perfect life, while she is secretly living in misery. ...read more.