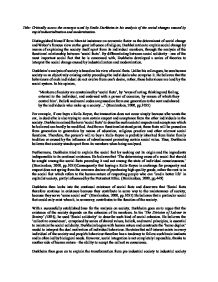 Critically assess the concepts used by Emile Durkheim in his analysis of the social changes caused by rapid industrialization and modernization.

Title: Critically assess the concepts used by Emile Durkheim in his analysis of the social changes caused by rapid industrialization and modernization. Distinguished himself from Marxist insistence on economic factor as the determinant of social change and Weber's famous view on the great influence of religion, Durkheim tries to explain social change by means of explaining the society itself apart from its individual members, through the analysis of the functional relationship between 'social facts'. By differentiating between social solidarity - one of the most important social fact that he is concerned with, Durkheim developed a series of theories to interpret the social change caused by industrialization and modernization. Durkheim's analysis of society is based on his view of social facts. Unlike his colleagues, he sees human society as an objectively existing entity preceding the individuals who comprise it. He believes that the behaviours of each individual do not evolve from one's desire, rather, these behaviours are lead by the social system. In his opinion, 'Members of society are constrained by 'social facts', by 'ways of acting, thinking and feeling, external to the individual, and endowed with a power of coercion, by reason of which they control him'. ...read more.

And such solidarity is still spacious enough to allow for further division between individual conscience and collective conscience. However, the collective conscience is still the essence to maintain the social unity and can not be neglected. Nevertheless Durkheim also perceived the potential instability of this type of solidarity caused by the substance of division of labour from the view of human nature. His 'homo duplex' model interprets the fact with the self-interest behind an individual's behaviour. And when this side of human nature predominates, it will seriously affect one's ability to accept the collective conscience. Consequentially, self-interest will become the sole guideline of social life and the disintegration of the society will take place. For Durkheim, this collapse of a society is an extreme case of 'Anomie', the term he used to describe the society under normlessness. According to him, anomie will occur when the rapid social change seriously disrupt the existing moral regulation and common conscience while the new social order is yet to be formulated. Norms will be questioned and the level of individual's life desire will be confused. This disruption therefore will encourage the dependence on self-interest, thus reducing the degree of social integration. ...read more.

On the other side, Ferdinand Tonnies also rejected Durkheim's analysis of social solidarity, seeing that solidarity is disintegrating during the transition from Gemeinschaft (community) to Gesellschaft (societal) (Grint, 1998, p95). However, illustrated with the situation in modern China, many of Durkheim's theories should still be seriously considered especially when analysing the changes of human society. As a virtual functionalist, Emile Durkheim produced series of concepts based on his unique interpretation on 'social facts'. He concentrates himself on the analysis of social solidarity by explaining how it changed by the development of division of labour and showing its importance of integration of a society. He also expounds the situation in which social solidarity might break down and termed 'anomie' to define such scenarios. His concepts have proven themselves to be still up to date and valuable by providing a reasonable explanation to the current situation in the Chinese society. Reference Haralambos, M. Holborn, M. (2000) Sociology, Themes and Perspectives 5th ed. England, Collins Educational Publisher, London, the United Kingdom Morrison, K. (2000) Marx Durkheim Weber, SAGE Publications Ltd., London, the United Kingdom Observer Report: China's Industrialization to Take 20 Years: Academician, People's Daily, 28th Oct. 2002, Beijing, China Durkheim, E. Moral Education, The Free Press, Glencoe Grint, K (1998) The Sociology of Work 2nd ed. ...read more.