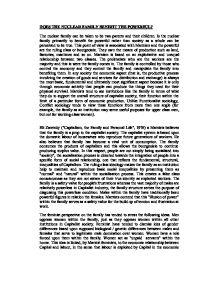 Does the nuclear family benefit the bourgoisie?

DOES THE NUCLEAR FAMILY BENEFIT THE POWERFUL? The nuclear family can be taken to be two parents and their children. Is the nuclear family primarily to benefit the powerful rather than society as a whole can be perceived to be true. This point of view is associated with Marxism and the powerful are the ruling class or bourgeoisie. They own the means of production such as land, factories, machines and so on. Marxism is based on an exploitative and unequal relationship between two classes. The proletariats who are the workers are the majority and this is were the family comes in. The family is controlled by those who control the economy and they control the family and manipulate the family into benefiting them. In any society the economic aspect (that is, the productive process involving the creation of goods and services for distribution and exchange) is always the most basic, fundamental and ultimately most significant aspect because it is only through economic activity that people can produce the things they need for their physical survival. ...read more.

Marxists contend that this "illusion of power" within the family serves as a safety value for the build-up of tension and frustration at work. The feminist perspective on the family has tended to stress the following ideas. Men oppress women within the family, just as they oppress women within all other institutions in Capitalist society. Feminist have tended to dismiss ides of gender differences based upon supposed biological / genetic differences between males and females that serve to legitimate male domination over women. Women have a role forced upon them within the family. Women act as "unpaid servants" within the home. This idea is linked, by Marxist feminists, to the economic relationship between Capital and labour, in the sense that labour is exploited by Capital in the economic aspect just as women are exploited by men within the family. They see family benefiting the powerful who are the men, this is patriarchy. Functionalist sociology has tended to look towards the family as the cornerstone of social integration in any society by which is meant the idea that ways have to be found to make ...read more.

In short, it provides a sense of belonging and serves to clearly-define role relationships between men and women. Provision of a Home: This idea expresses the assumption that people find comfort and security within primary social and sexual relationships. The "home" not only provides physical shelter, it also serves as the focal point of family existence. I recognise that the family group serves some kind of purpose in any society. Where Marxists tend to disagree with thinkers working in other perspectives, however, is in relation to the nature of that purpose and, for Marxists, the relationship between the family and the social structure of any society is one of unequal dependence. Functionalists argue that social institutions develop out of the need to satisfy, fulfil and organise various human social needs. However I feel that the primary role of the family is not to benefit the powerful but in some societies it does to an extent conform to this idea. There are other functions of the family such as the socialisation of children also providing love and support for its members which does not always benefit the powerful. ...read more.

This essay identifies the correct theories to use and cover the basic assumption of each theory well. However, there are a distinct lack of sociologists, key terms and theory to back up the points being made.