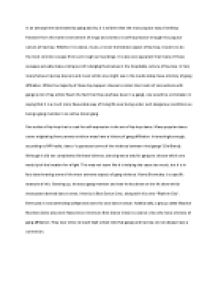 ﻿In an atmosphere dominated by gang activity, it is evident that the most popular way of seeking freedom from this harsh environment of drugs and violence is self-expression through the popular culture of hip-hop. Whether it is dance, music, or even the fashion aspect of hip-hop, it seems to be the most common escape from such rough surroundings. It is also very apparent that many of these escapees actually make a living out of indulging themselves in the hospitable culture of hip-hop. In fact, many famous hip-hop dancers and music artists one might see in the media today have a history of gang affiliation. While the majority of these hip-hoppers choose to retain their roots of connections with gangs (a lot of rap artists flaunt the fact that they are/have been in a gang), one would be unmistaken in saying that it is a much more favourable way of living life over being under such dangerous conditions as being a gang member in an active street gang. One outlet of hip-hop that is used for self-expression is the art of hip-hop dance. Many popular dance crews originating from poverty-stricken areas have a history of gang affiliation. ...read more.

According to this, graffiti started trending in inner-city youth (in which many of this population is involved in gang activity) in the early 1970?s, around the same time that the whole hip-hop culture was established. This shows that the escapement of harsh gang activity in poor, ghetto neighbourhoods through self-expression in hip-hop culture is and always has been one of the most prominent ways of dealing with this harsh life. The same article states that ?Wall graffiti can be indicators of attitudes, behavioural dispositions, and social processes in settings where direct measurement is difficult? (Ley and Cybriwsky, 491). This is a direct indicator that at least some teenagers involved with gangs have made clear action of discontinuing their gang affiliation through self-expression of graffiti. It is also apparent that graffiti replaced gang violence in the sense that it decided which was the more dominant gang solely on the basis of who had marked their territory more. The music aspect of hip-hop culture is undoubtedly the most popular and most widely-distinguished part of this hospitable culture. It has made its way over the years into the mainstream media heard and seen on a daily basis, and in such has become the most acceptable component of hip-hop. ...read more.

But this is not the full list of successful rappers today that have shared that experience. In fact, hundreds of these relevant rappers have/had some sort of gang affiliation. While a slight majority of these rappers take pride in knowing they have been dispersed in this hostile and harsh environment, they must all realize that it is a much better life to live than that of an active gang member. To conclude, it has come very obvious that self-expression through hip-hop culture is the most prominent way of evading gang-related activity. It definitely seems as though hip-hop has become a very hospitable culture for inner-city youth indeed, and will continue to provide support for this youth as long as hip-hop stays in its current condition as a popular and socially-acceptable lifestyle. Although it does not withhold the ability to completely eliminate gang activity, it truly is a very helpful system of taking in troubled youth. Additionally, it contains the power to bring a distressed individual incorporated with gangs into a blossoming and successful human being in society. Hip-Hop: A Way of Seeking Freedom from Gang-Related Activity HSP3M0D Ms. Ford By: Daniel Cummer June 16th/ 2011 ...read more.