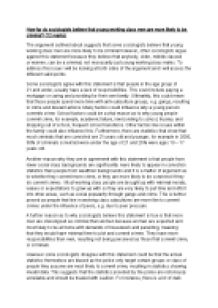 How far do sociologists believe that young working class men are more likely to be criminal?

This is further proved as people that live in working class subcultures are more like to commit crimes under the influence of peers, e.g. due to peer pressure. A further reason as to why sociologists believe this statement is true is that more men are stereotyped as criminal than women because women are expected and most likely to be at home with demands of housework and parenting, meaning that they would have minimal time to plot and commit crimes. They have more responsibilities than men, resulting not being perceived as those that commit crime, or criminals. However some sociologists disagree with this statement could be that the actual statistics themselves are biased as the police only target certain groups or class of people they assume are most likely to commit crime, resulting in statistics showing invalid data. This suggests that the statistics provided by the police are notoriously unreliable and should be treated with caution. ...read more.

A further reason why other sociologists disagree with this statement is due to the chivalry thesis, which stresses the idea that men are perceived as more of a ?serious threat? to society and need to be watched more, while women are treated more leniently and are usually let off with a warning for minor offences. A feminist view upon this may be that women are treated with less equality to men as the police assume they have more responsibilities at home. In conclusion, some sociologists believe that young working class men are more likely to commit crime than any other sections of age, class or gender because of various factors such as lack of responsibilities, demands of parenting and housework of women and the lower values of working class. Whereas others disagree and believe that anyone can commit crime, for example middle classed people are more likely to commit white collar crime, the chivalry thesis which leads to biased behaviour towards different genders and the idea that if policing is biased then statistics are very likely to be biased. ...read more.