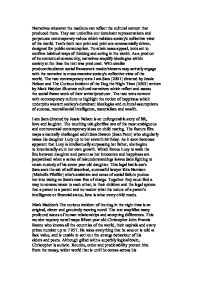 Narratives whatever the medium can reflect the cultural context that produced them. They can underline our dominant representations and perpetuate contemporary values which validate society's collective view of the world. Text's both non print and print are commercially driven, designed for public consumption. To attain mass appeal, texts act to confirm habitual ways of thinking and acting in the world. As a product of its contextual community, narratives amplify ideologies within society at the time the text was produced. With similar producer/audience social framework reader/viewers may actively engage with the narrative to cross examine society's collective view of the world. The two contemporary texts I am Sam [2001] directed by Jessie Nelson and The Curious Incident of the Dog the Night Time [2003] written by Mark Haddon illustrate cultural narratives which reflect and assess the social frame work of their writer/producer. The two texts connect with contemporary culture to highlight the notion of happiness which underpins western society's dominant ideologies and cultural assumptions of success, mental/social intelligence, materialism and wealth. I am Sam directed by Jessie Nelson is an unforgettable story of life, love and laughter. The touching tale glorifies two of the most ambiguous and controversial contemporary ideas on child rearing. The feature film maps a mentally challenged adult Sam Dawon [Sean Penn] who singularly raises his daughter Lucy up to her seventh birthday. ...read more.

It's about accepting that every life is narrow and that our only escape from this is not to run away [to another country, another relationship, a slimmer, more confident self] but to learn to love the people we are and the world in which we find ourselfs. Haddons use of cognitive astrayment through Christophers severly logical point of view popstions readers to question the common sense and cultural assumptions of their own western instiutions, and habits of perception. For example; I found myself questioning whether it is any less logical for 3 red cars to mean that a happy day is ahead, than it is for the frequently western practised symbol of 'sunshine' meanign a good rewarding day is in advance. As Christopher says "People go on hoildays to see new things.... but i think that there are so many things just in one house that it would take years to think about all of them properly" This vivid portrait of an unique often marginlised perception of life coping rituals highlights the small things in life that most of us forget to look at. The 'life lessons' situate readers to acknowledge the commonly framed 'invaild' can excel the minds of those individuals who conform to cultural assumptions. As readers learn although Christopher's path is different from most, he is still in search for the happiness we all seek... As readers appreciate teh strange unique beauty of Chrisophers grasp of life. Which demonstrates the profound functions of the human mind and encourages individuality as the text proves idealogies are apparent without cultural frameworks. ...read more.