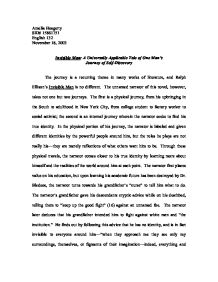 Invisible Man: A Universally Applicable Tale of One Man's Journey of Self-Discovery.

Amelia Heagerty SID# 15861751 English 132 November 18, 2003 Invisible Man: A Universally Applicable Tale of One Man's Journey of Self-Discovery The journey is a recurring theme in many works of literature, and Ralph Ellison's Invisible Man is no different. The unnamed narrator of this novel, however, takes not one but two journeys. The first is a physical journey, from his upbringing in the South to adulthood in New York City, from college student to factory worker to social activist; the second is an internal journey wherein the narrator seeks to find his true identity. In the physical portion of his journey, the narrator is labeled and given different identities by the powerful people around him, but the roles he plays are not really his-they are merely reflections of what others want him to be. Through these physical travels, the narrator comes closer to his true identity by learning more about himself and the realities of the world around him at each point. The narrator first places value on his education, but upon learning his academic future has been destroyed by Dr. Bledsoe, the narrator turns towards his grandfather's "curse" to tell him what to do. The narrator's grandfather gave his descendants cryptic advice while on his deathbed, telling them to "keep up the good fight" (16) against an unnamed foe. The narrator later deduces that his grandfather intended him to fight against white men and "the institution." He finds out by following this advice that he has no identity, and is in fact invisible to everyone around him-"when they approach me they see only my surroundings, themselves, or figments of their imagination-indeed, everything and anything except me" (3). His physical journey leads him down the path of self-discovery, only for him to find that he is no original being and has no identity. The narrator is nothing more than Invisible Man. He learns this only after a great deal of travel and hard-learned lessons, however, and after truly searching himself and the world in which he lived for answers. ...read more.

Acting as though he agrees and supports the Brotherhood's vision when in reality he sees the ultimate error in their philosophy, the narrator functions as he had before his realization. He follows orders and implements plans created by higher-ups, but hopes that eventually something cataclysmic will occur, proving his correctness and the inaccuracy of the Brotherhood's vision. The advice from his grandfather inspires him to action and gives him the drive needed to fight back. The riot in Harlem is the answer to his hopes. Extreme violence and widespread bloodshed are inflicted on, and by, the people of Harlem, and the Brotherhood's contingency in Harlem is destroyed and overtaken by Ras the Exhorter. Ras encourages the violence and urges solidarity along racial lines, telling the black men to fight the white oppressor and inflict more violence against their aggressors, including the Brotherhood in this group. The narrator goes to Harlem during the riots after receiving a phone call from the Brotherhood, and is shot by a policeman. Instead of calming the riots, the narrator follows several aggressors and even takes part in the arson of a slum tenement. He never reaches the Brotherhood offices, and in fact never sees any of the Brothers again. At this point in his journey, the narrator has begun to think that he is invisible, and his fate as Invisible Man is secured when he falls into a manhole while trying to evade men who are chasing him. In the dark, underground, he is physically invisible and cannot be seen by his pursuers. Having reached the conclusion of his physical journey, he continues to strive towards self-realization, and comes to the ultimate termination of this as well when he states in all certainty that he is invisible. "I'm an invisible man and it placed me in a hole-or showed me the hole I was in, if you will-and I reluctantly accepted the fact. ...read more.

The narrator is just one man. Almost any black man living in the hypocritical and racist American society in which the narrator lived could have told a similar story. The narrator has a powerful voice, and conveys through this voice the potent emotions he experiences as Invisible Man. The pain and reality of his situation are conveyed all the better because the reader does not know everything about him. Ellison does not share the narrator's birth name, or the name he is given by Brother Jack, or the name of the college the narrator attends, or even the state in which the school is located. The reader knows only that the narrator came from the South, having attended a prestigious Negro state college. But no specifics are revealed to the reader, allowing the story of this one man to speak for all in similar situations because of the universality of his drama. Everyone can identify with the struggle to find one's individuality amid the hustle of so many other human beings just like oneself, all trying to stay afloat in a cutthroat and dangerous world. Because of its widespread appeal to human emotion, the story told by Invisible Man gained a diverse audience and a place in literary history. The novel was just one representation of a universal fight, battled by all oppressed peoples caught within the framework of societal prejudice all over the world and for hundreds and hundreds of years past. Invisible Man, in his struggle to find his unique personality amid a world of preconceived notions and pigeonholing ideals, touched on an issue experienced by many other people in all different walks of life-black, white, and all the races of the world. His fight was the fight of each man, and although many of his difficulties arose from the fact that he was African-American, Ellison intended the narrator of Invisible Man to be a universal character with universal appeal, and the popular acceptance of the novel is proof that he was successful in his aim. ...read more.