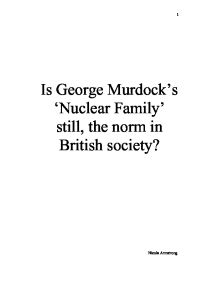 This can also reflect into why the reconstituted family is increasing. This is due to an individual having a child outside of wedlock, and bringing it up as a single parent. This may later on result in marriage to another partner, which will form a reconstituted family. Evaluation In evaluating my methodology, I feel that I choose the most appropriate process for this type of research. This research was based on finding out if the nuclear family was still the norm, in British society, to do this successfully; I had to gather quantitative data in order to turn into percentages to, prove if it was still the norm. The use of closed-questions in my questionnaire, made it a lot easier to produce the quantitative, data, as the participant only ticked the box, which applied to them, and so all I had to do was make a tally of the participants answers and turn them into percentages. The use of the closed-question, limit the freedom of response of the participant, and so I was able to extract the information I needed without any chance of their being misleading answers, which I would certainly have got if I had used open-questions. For, this research, I wanted to keep absolute anonymity, and confidentiality of the participant. In my pilot study, I had identified that the participants may of felt they could not share their answers with me, in the fear of being judged. By using a self-completion questionnaire, I was able to lighten this fear, allowing their answers to be truthful, leaving me with reliable and valid results. This was furthered by, asking the participant's to place their completed questionnaires into an un-marked envelope, and giving it back to, me in which I did not open until, I had collected them all in. Even, though I attempted to apply total confidentiality for the participants, I was unable to achieve this. ...read more.