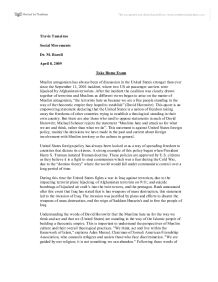 Muslim antagonism has always been of discussion in the United States stronger than ever since the September 11, 2001 incident, where two US air passenger carriers were hijacked by Afghanistan terrorists. After the incident the coalition was closely drawn together of terrorists and Muslims as different views began to arise on the matter of Muslim antagonism, “the terrorists hate us because we are a free people standing in the way of the theocratic empire they hoped to establish” (David Horowitz). This quote is an empowering statement declaring that the United States is a nation of freedom taking away the freedoms of other countries trying to establish a theological standing in their own country. But there are also those who tend to oppose statements in such of David Horowitz; Michael Scheuer rejects the statement “Muslims hate and attack us for what we are and think, rather than what we do”. This statement is against United States foreign policy, mainly the decisions we have made in the past and current about foreign involvement with Muslim territory or the culture in general.

United States foreign policy has always been looked at as a way of spreading freedom to countries that dictate its citizens. A strong example of this policy began when President Harry S. Truman instated Truman doctrine. These policies are approved by U.S. citizens as they believe it is a fight to stop communism which was a fear during the Cold War, due to the “domino theory” where the world would fall under communistic control over a long period of time.

During this time the United States fights a war in Iraq against terrorism, due to the impacting terrorist plane hijacking of Afghanistan terrorists on 9/11; and suicide bombings of hijacked air craft’s into the twin towers, and the pentagon. Bush announced after this event that Iraq has stated that is has weapons of mass destruction, this statement led to the invasion of Iraq. The invasion was justified by plans and efforts to disarm the weapons of mass destruction, end the reign of Saddam Hussein's and to free the people of Iraq.

Understanding the words of David Horowitz that the Muslims hate us for the way we think and act and that we (United States) are standing in the way of the Islamic people of building a theocratic empire. This is important to understand the perspectives of Muslim culture and their overall theological practices. "We think, act and live within the framework of Islam," explains Adan Mursal, Chairman of Somali American Friendship Association, who counsels refugees and assists those who face discrimination. "We are guided by our religion; it is not something we can abandon." Following these words of practice the practices of an Islamic (Muslim) individual bases his ways upon his/her theological beliefs, i.e. the book of Allah (Quran). (Minnesota Department of Human Rights)

So why is it that the Islamic race holds a grudge and performs the actions such as 9/11 against the United States? “Political relations between Iran and the United States began in the mid to late 1800s, but had little importance or controversy until the post-World War II era of the Cold War and of petroleum exports from the Persian Gulf. Since then an era of close alliance between Shah Mohammad Reza Pahlavi's regime and the American government was followed by a dramatic reversal and hostility between the two countries after the 1979 Iranian Revolution.”(Defronzo) Events from the Iranian revolution, from Shah receiving United States backing caused a critical blow against Islamic radicals who wanted to overthrow the regime set in place by the United States and start a republic lead by Ayatollah Khomeini. This United States backing permanently scarred the U.S. against Islamic (Muslim) culture. The Iranian Revolution essentially ended with Shah falling and the restoration of a full monarchy to take place.

“A major turning point in the revolution that helped radicalize the revolution and undermined Iranian moderates was the holding of 52 American diplomats’ hostage for over a year. In late October 1979, the exiled and dying Shah was admitted into the United States for cancer treatment. In Iran there was an immediate outcry and both Khomeini and leftist groups demanding the Shah's return to Iran for trial and execution. On 4 November 1979 youthful Islamists, calling themselves Muslim Students “followers of the Imam's Line”, invaded the embassy compound and seized its staff. Revolutionaries were reminded of how 26 years earlier the Shah had fled abroad while the American CIA and British intelligence organized a coup d'état to overthrow his nationalist opponent.”(Gerges) This event towards the end of the Iranian revolution was a major event that showed theological motion of the Muslims towards resentment and pent up discrimination of trust towards the United States.

For those that oppose the Muslims’ theological structures and ideologies could debate that United States culture and acting of foreign policy is its own structure and religion in its self. Of course it’s ultimately a different practice than a traditional religion or theological practice, but it has structure like a religion, a set of laws like a Bible or Quran, it has a boundary with its followers (The United States) and a military like missionaries or Muslims themselves. So by following set of structure such as the Truman doctrine how is the differentiation of how Muslims follow their structure any different? Muslims base their decisions among their beliefs and customs, as does a United States structured government, so is it the United States interfering with the Muslims trying to establish their theocratic empire? Or is it the Muslims that are interfering with the United States trying to establish a world ideology that is structured of a Democratic Republic Capitalist system?

The United States is currently in a war against Iraq fighting terrorism, the United States policies dictate the freeing of the Iraqi citizens, protection of the world from weapons of mass destruction, and the success of bring down Saddam Hussein. Osama Bin Laden fights a war against the U.S. defending their political systems and theological structure. The correct take of action does not exist as those with different ideals can only come to compromise by separating their ideals and respecting the others’. David Horowitz was indeed correct with his theory, but what he did not mention was the other side of the argument. The United States fights for its justice and nature as well as Muslims, the only true solution is a compromise of co-existing with a set of boundaries that gives everyone the freedom of nature to abide by their own theological structure and morals. The fantasy of something so superficial in a realistic un-ideal society of that of the human race will possibly never exist.