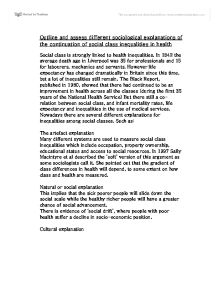 Outline and assess different sociological explanations of the continuation of social class inequalities in health Social class is strongly linked to health inequalities. In 1842 the average death age in Liverpool was 35 for professionals and 15 for labourers, mechanics and servants. However life expectancy has changed dramatically in Britain since this time, but a lot of inequalities still remain. The Black Report, published in 1980, showed that there had continued to be an improvement in health across all the classes (during the first 35 years of the National Health Service) But there still a co-relation between social class, and infant mortality rates, life expectancy and inequalities in the use of medical services. ...read more.

Natural or social explanation This implies that the sick poorer people will slide down the social scale while the healthy richer people will have a greater chance of social advancement. There is evidence of 'social drift', where people with poor health suffer a decline in socio-economic position. Cultural explanation This suggests that the lower social classes prefer less healthy lifestyles, eat more fatty foods, smoke more and exercise less than the middle and upper classes. While the 'hard' version of this explanation, that the freely made choices of individuals in each social class are responsible for differing health outcomes. However it is a 'blanket statement' if not everyone in a certain area or social class eats, drinks and behaves the same due to their availability to certain things. ...read more.

Poverty is demonstrably bad for health. However material explanations are not sufficient on their own to explain class differences in health. While life expectancy is lower in poorer, less developed countries, some diseases are more prevalent in the richer West. However when we look at how these diseases are distributed within the wealthy nations we find that they are most prevalent in their poorest regions. Social class is a complex construct that may involve status, wealth, culture, background and employment. It would therefore be naive to look for a simple relationship between class and ill health. Each individual person will experience a number of different influences on their health both through work and their everyday things in life. And some just happen to be due to inequalities in social class. Paul Mc Alister ...read more.