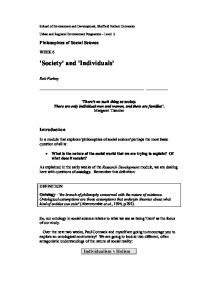 School of Environment and Development, Sheffield Hallam University Urban and Regional Environment Programme - Level 2 Philosophies of Social Science WEEK 6 'Society' and 'Individuals' Rob Furbey ________________________________________________________________ 'There's no such thing as society. There are only individual men and women, and there are families'. Margaret Thatcher Introduction In a module that explores 'philosophies of social science' perhaps the most basic question of all is: * What is the nature of the social world that we are trying to explain? Of what does it consist? As explained in the early weeks of the Research Development module, we are dealing here with questions of ontology. Remember this definition: DEFINITION Ontology - 'the branch of philosophy concerned with the nature of existence. Ontological assumptions are those assumptions that underpin theories about what kind of entities can exist' (Abercrombie et al., 1994, p.292). So, our ontology in social science relates to what we see as being 'there' as the focus of our study. Over the next two weeks, Paul Cormack and myself are going to encourage you to explore an ontological controversy! We are going to look at two different, often antagonistic understandings of the nature of social reality: Individualism v Holism As we define these two terms now, you will see that they involve different ontological assumptions: DEFINITIONS Individualism - 'refers to a collection of doctrines which stress the importance of the individual in relation to other entities'. (Abercrombie et al., 1994, pp.210-11) Holism - 'is the doctrine that societies should be seen as wholes, or as systems of interacting parts. Analysis should, therefore, start from large-scale institutions and their relationships, not from the behaviour of individual actors. Societies, in this view, have properties as wholes which cannot be deduced from the characteristics of individuals' (Abercrombie at al, 1994, pp201 For some, therefore, the study of the social world is, ultimately, the study of individuals. ...read more.

Some of these critics were predictable - straightforward reactionary conservatives, often traditional Catholics, who looked back with affection and a sense of loss to pre-modern Christendom.8 Others, however, were enthusiastic about the potential of the new modern world and committed to the prospects for progress through science, but fearful of the consequences of unchallenged individualism. ACTIVITY 1 Here you can make some links between two modules in your Level 2 course. Look again at your notes for Weeks 1 and 2 of the Society, Politics and Cities (SPC) module. On pp. 5-7 of the Week 1 notes you will see how Auguste Comte, who first coined the word 'sociology', was both critical of Enlightenment individualism, but also continuous with it. He saw it as an engine of progress, but he also feared that it was unsustainable, lacking social cohesion and leading to war and revolution. Hence, the early sociologists wee anxious to secure social cohesion and harmony. In Week 2 of SPC we looked more at middle-class fears in England about the social consequences of capitalist individualism and attempts through social intervention (especially in housing and town planning) to achieve community and cohesion. Read these notes again, noting the links between these material concerns and the philosophical division between individualism and holism. In this more progressive critique of individualism, we encounter the first developments of sociological 'holism'. In the work of people like Saint Simon and Auguste Comte, we see a focus on 'society' which challenged the individualism of their times. Both these French writers identified a process of social evolution whereby one type of society was replaced by another. Thus, Comte traced a movement through three stages 'theological' society; 'metaphysical' society; and 'positive' society. We are now living in the 'positive' age. Comte was enthusiastic about this and saw 'positive' science as offering the potential for unprecedented progress and prosperity. But the new world was perilous and unstable. ...read more.

Here, we can point to two sociologists from different eras that have tried to combine individualism and holism. * Max Weber - sought to develop social explanations that were adequate at two levels: o The level of meaning - that is, explanation has to make sense in terms of the meanings which people give to their actions and that of others. This involves taking the individual's account of their behaviour seriously.9 o The level of cause - that is, a form of explanation that can show that one state of affairs can bring about another. So, in explaining the rise of capitalism in Western Europe before elsewhere, in causal terms, Weber identified the distinctive nature of Protestant Christianity as a possible causal factor. He then looked at the world through the eyes of the Protestant Calvinist to show how his/her belief system would lead to a particular view of the world conducive to capitalist success. In other words, he looked at their meanings. His analysis involves a focus on both individuals and social wholes, but, in the end, Weber argued that explanations must be rooted in the study of individuals. In this sense, he was a methodological individualist. * Anthony Giddens - writing much more recently, Giddens has sought to hold together individuals and wholes in his theory of 'structuration' (Giddens, 1979) In the process the language has changed to refer to: o human agency (this can mean particular individuals or individuals operating together or in conflict with one another); and o social structures (these may act as constraints on people, determining their actions, but they are also themselves the product of human agency and can serve to enable people to act Both Weber and Giddens alert us to the possibility that the best explanations are ones that can combine a focus on * individuals and on wholes; * human meanings and causal links; and * human agency and social structures. Easier said than done, and Giddens has been criticised for not backing up his theory of structuration with examples. ...read more.