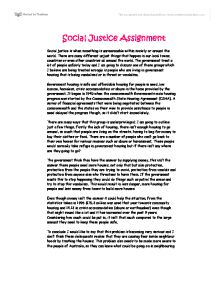 Social Justice Assignment Social justice is when something is unreasonable within society or around the world. There are many different unjust things that happen in our local towns, countries or even other countries all around the world. The government treat a lot of people unfairly today and I am going to discuss one of these groups which I believe are being treated wrongly is people who are living in government housing that is being vandalised or in threat or vandalism. Government housing is safe and affordable housing for people in need, low income, homeless, crisis accommodation or abuse in the home provided by the government. ...read more.

There are a number of people who can't go back to their own homes for various reasons such as abuse or harassment. These people would normally take refuge in government housing but if there isn't any where are they going to go? The government think they have the answer by supplying money, this isn't the answer these people need more houses, not only that but also protection, protection from the people they are trying to avoid, protection from vandals and protection from anyone else who threatens to harm them. If the government wants this to stop happening they could do things such as patrol the areas and try to stop this vandalism. ...read more.

even though that might sound like a lot and it has increased over the past 9 years. Considering how much could be put in, it isn't that much compared to the large amount they need to keep these people safe. To conclude I would like to say that this problem is becoming very serious and I don't think these delinquents realise that they are causing fear inside neighbour hoods by trashing the houses. This problem also needs to be made more aware to the people of Australia, so they can know what could be going on in neighbouring areas and so they can do something about it. If we want this problem solved all of Australia should be informed as well as the government and we should be able to come to a decision that will benefit these people. ...read more.