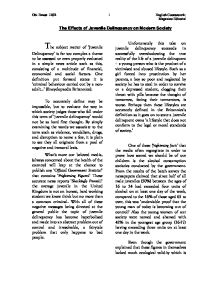 The Effects of Juvenile Delinquency on Modern Society.

The Effects of Juvenile Delinquency on Modern Society The subject matter of 'Juvenile Delinquency' is far too complex a theme to be assessed or even properly evaluated in a simple news article such as this, consisting of a multitude of financial, economical and social factors. One definition put forward states it is 'criminal behaviour carried out by a non-adult...' (Encyclopaedia Britannica). To accurately define may be impossible, but to evaluate the way in which society judges those who fall under this term of 'juvenile delinquency' would not be as hard first thought. By simply examining the words we associate to the term such as violence, vandalism, drugs, and disruption to name a few, it is plain to see they all originate from a pool of negative and immoral lexis. What's more our beloved media, (always concerned about the health of the country) will leap at the chance to publish any 'Official Government Statistic!' that contains 'Frightening Figures!' These accurate news reports 'Shockingly Proves!!!' the average juvenile in the United Kingdom is not an honest, hard working student we know think but no more than a common criminal. With all of these negative messages being directed at the general public the topic of juvenile delinquency has become hyperbolised and made into an abstract problem out of control and irresolvable, a fairytale problem that only happens to bad people. ...read more.

to add that they are also deemed as immoral, illegal and will more than likely cause huge problems in the way you live your life. A Utopia lifestyle were liberal sex does not produce sexually transmitted diseases, excessive alcohol never leads to addictions and illegal drugs are safe to use even though your never sure what your taking. However to impose the same stigmas on all juveniles would be almost as ignorant as pretending that the problem of juvenile delinquency does not exist. A recent survey conducted on multiple cultures by an independent organisation found that in England alone over 60% of juveniles where very unhappy with the condition of their lives, with 40% describing themselves as 'severely depressed'. These figures dropped to 45% and 32% in Ireland and Northern Ireland and even further in Scotland. Yet the biggest surprise came when England, despite being one of the richest and most stable countries in Europe and the world, only three countries poorer than England reported a higher rate of unhappiness in their youth population, out of the 35 countries surveyed. Assuming these results were accurate the question has to be asked, why do the youth of other cultures or countries deem themselves to be living happier lives? ...read more.

Whatever your religious beliefs or orientations it is clear to see that when the youth are given such strong teachings they are stronger to cope with the many immoralities of this world that lead to delinquency. Project Eden has seen crime fall and education rise in the Greater Manchester area, in a way government spending and advertising could never expect, highlighting the view that the only fabric that can hold a society together is the recognition and reverence of a stronger and morally better, higher power - and what so more than their creator? We should applaud Project Eden for their initiative and work but should parents wait for strangers to take pity on their own children or shouldn't this type of basic education and communication start from the home. Perhaps it was best summed up in the opening lines of a speech given by delinquency expert Stephen Johnson, to parents about the lessons to be learnt from the tragic events of school shootings: "IF PARENTS DON'T RAISE THEIR CHILDREN, THEN THEIR PEERS AND THE MASS MEDIA WILL, AND SOCIETY MAY NOT BE HAPPY WITH THE RESULTS." Obi Ernest 12SB 1 English Coursework: Magazine Editorial Obi Ernest 12SB 2 English Coursework: Magazine Editorial ...read more.