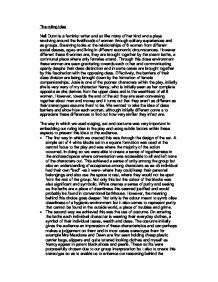 The ruling idea Nell Dunn is a feminist writer and so like many of her kind wrote plays revolving around the livelihoods of women through solitary experiences and as groups. Steaming looks at the relationships of 6 women from different social classes, ages and living in different economic circumstances. However different these 6 women are, they are brought together by the steam baths, a communal place where only females attend. Through this close environment these women are seen gravitating towards each other and communicating openly despite their class distinction and in some cases are brought together by this fascination with the opposing class. Effectively, the barriers of their class division are being brought down by the formation of female companionships. Josie is one of the poorest characters within the play, initially she is very wary of my character Nancy, who is initially seen as her complete opposite as she derives from the upper class and is the wealthiest of all 6 women. ...read more.

This achieved a sense of unity among the group but also an understanding of acceptance among characters as each individual had their own "bed" -as it were- where they could keep their personal belongings and also use the space to rest, where they would not be apart from the rest of the group. Not only this but the colour of the blocks was also significant and symbolic. White creates a sense of purity and seeing as the baths are a place of cleanliness this seemed justified and would probably be found in conventional bathhouse. However, the meaning behind this choice goes deeper. Not only is the colour meant to symbolise cleanliness of a hygienic environment but it also comes to represent purity that cannot be found in the outside world, a place of troubles and grime. * The second way we achieved this was the use of costume. On entering the baths each individual character is wearing their everyday clothes, a symbol of their individual tastes, wealth and class. ...read more.

Each women is subject to cases of either domestic violence, mental disorder or divorce, all which would have been shocking to be talked about so openly on stage. * A small factor is the play but also a very significant one, which added to our ruling idea, was the use of the character Bill Bradley. Nell Dunn purposefully wrote this play without a man in it and so the character of Bill is heard shouting from somewhere in the distance, responding to Violets hassles about the corroded pipes! We used this to our advantage and made a point of really shouting at him as if he were a complete nuisance not particularly because of the pipes but because he was a man and this slotted in with the fact that each and every woman at the baths has her grievances about men. From the way Dunn wrote this play it is evident that this was his purpose, to be completely set apart from this group of women who are slowly coming closer and closer to one another. ...read more.