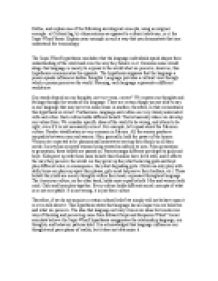 ﻿Define, and explain one of the following sociological concepts, using an original example: a) Cultural lag, b) ethnocentrism as opposed to cultural relativism, or c) the Sapir-Whorf thesis. Explain your example in such a way that you demonstrate that you understand the terminology. The Sapir-Whorf hypothesis concludes that the language individuals speak shapes their understanding of the world and even the way they behave in it. Common sense would allege that language is merely to express to the world what we perceive; however, this hypothesis communicates the opposite. The hypothesis supposes that the language a person speaks influences his/her thoughts. ...read more.

Each culture holds different beliefs. That is basically where we develop our values from. We consider specific ideas of the world to be wrong, and others to be right; even if it is not necessarily correct. For example, let?s speak about the Mexican culture. Gender stratification is very common in Mexico. All the sexism produces inequality between men and women. Men, generally, hold the power of the homes. Women are expected to be phenomenal housewives serving their family in all their needs. Society has accepted women being treated as inferior to men. From generation to generation, these beliefs are passed on. ...read more.

Every culture holds different social concepts of what is or not acceptable. It is not wrong, it is just their culture. Therefore, if we do not acquire a certain cultural belief we simply will not behave upon it or even talk about it. This hypothesis states that language has an impact on our behavior and what we perceive. The idea that language not only voices our ideas but creates our way of thinking and perceiving came from Edward Sapir and Benjamin Whorf. Social scientists believe the Sapir-Whorf hypothesis exaggerates the relationship language, our thoughts, and behavior patterns hold. It is acknowledged that language influences our thoughts and perceptions of reality, but it does not determine it. ...read more.