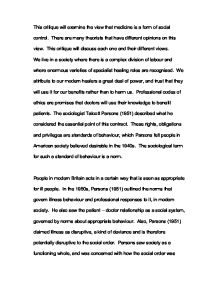 This critique will examine the view that medicine is a form of social control. There are many theorists that have different opinions on this view. This critique will discuss each one and their different views. We live in a society where there is a complex division of labour and where enormous varieties of specialist healing roles are recognised. We attribute to our modern healers a great deal of power, and trust that they will use it for our benefits rather than to harm us. Professional codes of ethics are promises that doctors will use their knowledge to benefit patients. The sociologist Talcott Parsons (1951) described what he considered the essential point of this contract. These rights, obligations and privileges are standards of behaviour, which Parsons felt people in American society believed desirable in the 1940s. The sociological term for such a standard of behaviour is a norm. People in modern Britain acts in a certain way that is seen as appropriate for ill people. In the 1950s, Parsons (1951) outlined the norms that govern illness behaviour and professional responses to it, in modern society. He also saw the patient - doctor relationship as a social system, governed by norms about appropriate behaviour. ...read more.

In the USA, it has been claimed that, while the role of medical power is repressive, doctors have little real autonomy. Their position as professionals has been increasingly eroded with the growth of the medical industrial complex. Health has been made into just another product for sale (McKinlay, 1984). Navarro (1979) argued that doctors act as servants of the capitalist state by ensuring that health and illness are conceptualised in individual terms. They emphasis diet, lifestyle and exercise rather than the part played by industrial process and capitalist production. They regulate sickness and contribute towards the productivity of capitalism by treating and returning workers to the workforce. Narvarro (1979) also suggested that the NHS in Britain consolidated medical power in health work, with the result that doctors as a dominant group supported a version of health care which focused on upper class and professional groups at the expense of working class health. The medical model reinforces the notion of health as a commodity and conceptualises illness as an individual responsibility. In Britain the health, work system has expanded in recent years the cost of maintaining it has risen and the numbers taking sick leave or undergoing hospital treatment have grown significantly. ...read more.

also argued that the level of patient medicine consumption and growing preoccupation with healthy lifestyles is evidence of how health is a paramount value and therefore how potentially controlling the medical profession has become. Foucault, in Madness and Civilisation (1965), also studied the way madness was socially constructed and took the notion of medicalisation even further. He showed how punishment had given way to treatment and how that implied the need for constant surveillance and monitoring. This is seen as the basis for new forms of power, which extend throughout the whole of society. He described what he called the clinical gaze as having moved beyond the hospital and the clinic into many and diverse sites such as our schools, workplaces, and homes. For Foucault (1973) the clinical gaze was a facet of a new kind of power, which relied on surveillance and inspection. In conclusion, this critique has critically examined the view that medicine is a form of social control. Discussing the views of theorists such as Talcott Parsons, Ivan Illich, Narvarro, Irving Zola and Foucault. These theorists have views about how dominating medicine can be in society, the power of the professionals and medicalisation how it refers social problems into medical problems. Throughout this critique, it has been made clear that medicine is a form of social control. ...read more.