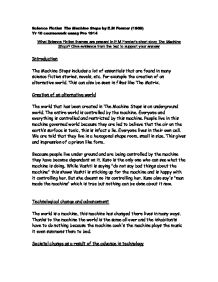 What Science Fiction themes are present in E.M Forster's short story The Machine Stops? Give evidence from the text to support your answer

Science Fiction The Machine Stops by E.M Forster (1909) Yr 10 coursework essay Pre 1914 What Science Fiction themes are present in E.M Forster's short story The Machine Stops? Give evidence from the text to support your answer Introduction The Machine Stops includes a lot of essentials that are found in many science fiction stories, novels, etc. For example the creation of an alternative world. This can also be seen in films like The Matrix. Creation of an alternative world The world that has been created in The Machine Stops is an underground world. The entire world is controlled by the machine. Everyone and everything is controlled and restricted by this machine. People live in this machine governed world because they are led to believe that the air on the earth's surface is toxic, this is infact a lie. Everyone lives in their own cell. We are told that they live in a hexagonal shape room, small in size. ...read more.

People are actually fearful of it. 'Vashti was seized with the terrors of direct experience'. 'People never touched one another. The custom had become obsolete owing to the machine'. This means that as people talk to each other through the machine all the time so there is no need for people to leave their cells to talk to each other face to face or participate in human contact. 'The machine clothes us and houses us; through it we speak to one another, through it we see one another, in it we have our being'. People isolate themselves alone with the machine. 'The clumsy system of public gatherings had been long since abandoned'. It has become so excessive that people do not even raise their own children. 'Parents, duties of...cease at the moment of birth'. The machine raises their children. If a child is born that promises to be a strong intelligent adult that could jeopardize the power and control that the machine harnesses it is killed. ...read more.

Kuno also realizes that he doesn't belong in this society. The machine knows he doesn't belong because he never shows any devotion to it as most individuals in the world. The machine is very strict about maintaining the society. I know this because in part two of the story Kuno tells his mother that he escaped to the surface of the earth but the machine captured him and brought him back underground. Failure of the utopian society The perfect society failed because people let the machine have too much control over their life. People stopped thinking for themselves so they couldn't do anything about it when the machine started to stop. People wouldn't believe that it was breaking because it was like a god to them. Vashti was particularly defiant to believe the speculations. 'It was rumoured that euthanasia, too, was out of order, and that pain had reappeared among men' Conclusion Fictional voyage of discovery Mans faith towards the machine resulted in the collapse of humanity. This discovery was regrettably revealed by society when it was too late to do anything about it. ...read more.