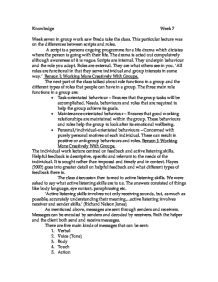 Knowledge Week 7 Week seven in group work saw Breda take the class. This particular lecture was on the differences between scripts and roles. A script is a persons ongoing programme for a life drama which dictates where the person is going with their life. The drama is acted out compulsively although awareness of it is vague. Scripts are internal. They underpin behaviour and the role you adapt. Roles are external. They are what others see in you. 'All roles are functional in that they serve individual and group interests in some way.' Benson J: Working More Creatively With Groups. The next part of the class talked about role functions in a group and the different types of roles that people can have in a group. The three main role functions in a group are: * Task-orientated behaviour - Ensures that the group tasks will be accomplished. Needs, behaviours and roles that are required to help the group achieve its goals. * Maintenance-orientated behaviour - Ensures that good working relationships are maintained within the group. These behaviours and roles help the group to look after its emotional wellbeing. * Personal/individual-orientated behaviours - Concerned with purely personal motives of each individual. These can result in positive or anti-group behaviours and roles. Benson J: Working More Creatively With Groups. The individual work lecture centred on feedback and active listening skills. Helpful feedback is descriptive, specific and relevant to the needs of the individual. It is sought rather than imposed and timely and in context. Hayes (2002) goes into greater detail on helpful feedback and what different types of feedback there is. The class discussion then turned to active listening skills. We were asked to say what active listening skills are to us. The answers consisted of things like body language, eye contact, paraphrasing etc. 'Active listening skills involves not only receiving sounds, but, as much as possible, accurately understanding their meaning...active listening involves receiver and sender skills.' ...read more.

Skills Week 9 Week 9 saw the amalgamation of old skills that I had for a long time and skills that I had only recently come across. These skills were to be put to use in the lab work. The active listening skills that I had come across weren't put into action yet as I was playing the role of the client in the exercise, but my conversational skills were definitely put to use. However, it wasn't on the one to one part of the exercise that I feel I used a lot of my skills. It was when I was watching the other pairs on the TV screen and taking notes on what was being done. Before that exercise, I had briefly gone over the 3-step process to giving effective feedback and I think this was a major benefit to me while taking the notes. I was able to be helpful and yet I could offer constructive criticism to the people involved. It was through this exercise that I realised the importance of feedback. Without feedback we could go round and round in circles making the same mistakes and never learn from them, but when we do get helpful feedback we can reflect on what we have done and we can therefore learn from our mistakes. I believe that the feedback that I gave was very helpful to the people involved as it was helpful and it was easy to understand. Feedback was also a very important aspect of the group work class as I was on the receiving end of the feedback this time. This feedback was from the group who were on the outside of the fishbowl. At first, I was talking the feedback personally but I soon realised that the feedback was on the group and not just on me. But I was able to learn from the information that I received and I can now put it to good use. ...read more.

However, this programme was ended unlike any other. It wasn't ended by an evaluation of the course, the tutors or the environment. It was ended with a self-evaluation, which I thought was brilliant. It got me to look at myself and how I've grown since I began the course and how much I have changed. From this experience I know now how to end a programme properly and as I have a group finishing in a few weeks, I intend to follow in your footsteps. Attitudes and Values Week 12 I went into week 12 very excited for two reasons. One, because Christmas was close, and two because I was finishing my first semester. I was very proud of myself, as I couldn't have imagined it such a short time ago. I became even more proud as I was doing the questionnaire. It was while I was doing it that I realised just how far I have come in such a short space of time. For example, my goal at the start of the year was to complete the first semester but now my goal is to go on and complete the module and become a fully qualified youth worker. My main achievement is being where I am today as I am where I want to be and there are not many people that can be as happy as I am in what I am doing. I'm satisfied with how I have done so far in my assignments but I know that I can do ten times better and that is what I intend to do, put more effort it. I am looking forward to my placement, as it will be a new experience from what I know and I hope I can learn from it. I will hopefully take what I learn and bring it into the class and also into my own youth setting. So far it has been an unbelievable year and I hope it just gets better and better. ...read more.