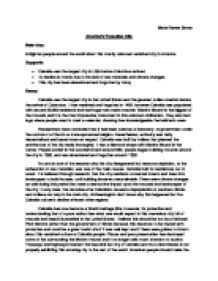 Cahokia was the largest city in USA before Columbus arrived. Its decline is mostly due to the lack of raw materials and climate changes.

Maria Renee Simon America's Forgotten City Main Idea: Enlighten people around the world about this mostly unknown vanished city in America. Supports: * Cahokia was the largest city in USA before Columbus arrived. * Its decline is mostly due to the lack of raw materials and climate changes. * This city has been abandoned and forgotten by many. Essay: Cahokia was the largest city in the United States and the greatest Indian creation before the arrival of Columbus. It has vanished and forgotten in 1492, however Cahokia was populated with around 20,000 residents and had huge man made mounds. ...read more.

It has a diamond shape with Monk's Mound in the center. People settled in this wonderful land around 650, people began building mounds around the city in 1050, and was abandoned and forgotten around 1300. No one is sure of the reasons why this city disappeared but resource depletion, or the exhaustion of raw materials, was one of the main causes. Cahokia built its residences out of wood. It is believed through research, that the city residents converted forests and trees into landscapes to build houses, until building became unsustainable. There were climate changes as well during this period that were a destructive impact upon the mounds and landscapes of the city. ...read more.

I believe this should be run by a National Park Service rather than the government of Illinois because this deserves to be treated with protection and could be a great tourist site if it was well kept and if there were guides to inform about this vanished culture or Cahokia people. Plazas and poor preservation has destroyed some of the surrounding the Monk's mound and it no longer calls much attention to tourists. Freeways and highways intersect the beautiful lost city of Cahokia and the United States is not properly exhibiting this amusing city to the rest of the world. American people should make the best out of this site and create this location a place for tourists as a tribute for pre-Columbian cultures. ...read more.