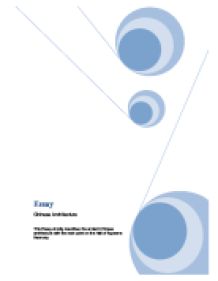 Chinese Architecture. This Essay shortly describes the ancient Chinese architecture with the main point on the Hall of Supreme Harmony.

It can be divided into two parts: the southern part is the "Outer Court" and consists of five halls (one of them is the Hall Of Supreme Harmony) for ceremonial purposes and other official business. The northern part, the "Inner Court", was where the emperor worked and lived with his family, eunuchs and maid-servants. Golden yellow has been an imperial colour for a long time and it is a dominant colour in the Forbidden City. Roofs have yellow glazed tiles and many decorations are painted yellow. This colour presents, in the ancient theory of the Five Elements, the earth, which was considered the centre of the universe. The Forbidden City nowadays is the world's biggest palace complex. The Hall of Supreme Harmony The Hall of Supreme Harmony was the most important building in the Forbidden City. The dimension, form, D�cor and furnishing of this hall are of highest standard. This hall was the symbol of the imperial power and it was the highest structure during the Ming and Qing dynasty. No other building was permitted to be higher. Until today it is the largest structure and the heart of the Forbidden City. The hall itself is 26.92 m high, 11 bays wide and five bays deep - a bay is the roof span between two supporting pillars -, occupying a floor area of 2,377 square metres. ...read more.

The first one is a man riding a chicken. He is followed by nine mythical figures and an additional one, which are in following order: Dragon (to protect against fire), Phoenix (controls the wind), Lion (protects the country and the imperial rule), Heavenly Horse (can run like the wind and travel thousands of miles a day), Seahorse (protect building from fire), Suan Ni (mythical beast, combination of lion, wild beat and wild horse), Guardian Fish (wind- and storm summoning fish), Xiezhi (can tell right from wrong) and Bull (dispels evil). The figure behind those mythical ones is an immortal carrying a sword. He symbolizes peace and harmony.3 The very last figure in this row is a dragon, larger than the other figures, representing the state. Nowadays the Hall is stripped off all the furniture, apart from the throne and it appears as a large empty hall. Conclusion The ancient Chinese architecture has lots of features, which had or still have different meanings in the life of the Chinese people. With a limited number of words it is not possible to give a full description of the architecture of the Forbidden City and the Hall of Supreme Harmony, not to mention all the ancient Chinese architecture. In comparison to sources about the architecture in other countries, the ones about the Chinese are numerous much less, but there will be people writing about these beautiful and interesting architectural features. ...read more.