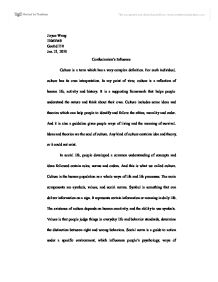 Confucianisms Influence. Confucius is Chinas most famous and influential political philosopher and teacher.

Jiayue Wang 11063369 GenEd 110 Jan. 21, 2010 Confucianism's Influence Culture is a term which has a very complex definition. For each individual, culture has its own interpretation. In my point of view, culture is a reflection of human life, activity and history. It is a supporting framework that helps people understand the nature and think about their own. Culture includes some ideas and theories which can help people to identify and follow the ethics, morality and order. And it is also a guideline gives people ways of living and the meaning of survival. Ideas and theories are the soul of culture. Any kind of culture contains idea and theory, or it could not exist. ...read more.

Values is that people judge things in everyday life and behavior standards, determine the distinction between right and wrong behaviors. Social norm is a guide to action under a specific environment, which influences people's psychology, ways of thinking and values in action. Talking about Chinese culture, I have to mention Confucius, the absolutely spirit leader of China. He is not only the Chinese culture's wise sage, but also his Analects of Confucius is considered as Chinese culture's bible. Confucius is China's most famous and influential political philosopher and teacher. "He taught the importance of behaving correctly to achieve moral power and believed that rulers should concern themselves with the well-being of their people" (Nosotro, Confucius). ...read more.

Benevolent should follow the master's words, "What you do not wish to yourself, do not do to others" (Simon, The Analects of Confucius). This is clearly demonstrated that Confucius's benevolence reflected the development of thinking. Secondly, Confucius advocated a good method of study is to review old knowledge to get new insights. The master said, "If a man keeps cherishing his old knowledge, so as continually to be acquiring new, he may be a teacher of others" (Simon, The Analects of Confucius). This method has been widely used, especially in the academic fields. To conclude, as a most influential man in the history of China, Confucius' ideas grow popular throughout China, and Confucianism also spread to countries such as Japan and Korea. Confucius' work eventually had a greater impact than he could have imagined. ...read more.