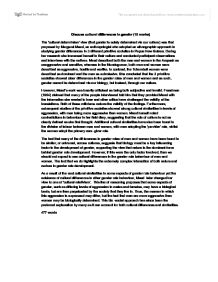 Discuss cultural differences in gender. The cultural determinism view (that gender is solely determined via our culture) was first proposed by Margaret Mead

Discuss cultural differences in gender (15 marks) The 'cultural determinism' view (that gender is solely determined via our culture) was first proposed by Margaret Mead, an anthropologist who adopted an ethnographic approach to studying gender differences in 3 different primitive societies in Papua New Guinea. During her research she immersed herself in their culture and conducted participant observations and interviews with the natives. Mead described both the men and women in the Arapesh as unaggressive and sensitive, whereas in the Mundugumor, both men and women were described as aggressive, hostile and warlike. In contrast, the Tchambuli women were described as dominant and the men as submissive. ...read more.

Both of these criticisms reduce the validity of the findings. Furthermore, subsequent studies of the primitive societies showed strong cultural similarities in levels of aggression, with men being more aggressive than women. Mead herself noted contradictions in behaviour in her field diary, suggesting that the role of culture is not as clearly defined as she first thought. Additional cultural similarities have also been found in the division of labour between men and women, with men adopting the 'provider' role, whilst the women adopt the primary care-giver role. The fact that many of the differences in gender roles of men and women have been found to be similar, or universal, across cultures, suggests that biology ...read more.

As a result of the vast cultural similarities in some aspects of gender role behaviour yet the existence of cultural differences in other gender role behaviour, Mead later changed her view to one of 'cultural relativism'. This line of reasoning proposes that some aspects of gender, such as differing levels of aggression in males and females, may have a biological basis, but are then perpetuated by the society that they live in. Thus, the manner in which this aggression is expressed may differ, but the fact that men are more aggressive than women may be biologically determined. This bio-social approach has since been the preferred explanation by many as it can account for both cultural differences and similarities. 477 words ...read more.