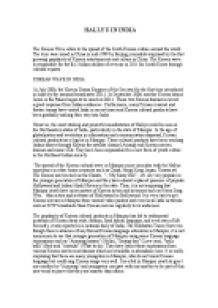 Hallyu in India - the influence of Korean culture in the Indian state of Manipur.

﻿HALLYU IN INDIA The Korean Wave refers to the spread of the South Korean culture around the world. The term was coined in China in mid-1999 by Beijing journalists surprised by the fast growing popularity of Korean entertainment and culture in China. The Korean wave is responsible for the $4.2 billion dollars of revenue in 2011 for South Korea through cultural exports. KOREAN WAVE IN INDIA In July 2006, the Korean Drama Emporer of the Sea was for the first time introduced in India by the national broadcaster DD-1. In September 2006, another Korean drama Jewel in the Palace began to be aired on DD-1. These two Korean dramas received a good response from Indian audiences . Furthermore, many Korean musical and theater troops have visited India in recent times and Korean cultural products have been gradually making their way into India. ...read more.

It is very easy to get Korean movies in Manipur from various video parlors and even local cable networks such as ISTV broadcasts these Korean movies regularly to its audiences. The popularity of Korean cultural products in Manipur has led to widespread imitation of Korean dress style, fashion, food habits, language, and even way of life. Recently, it was reported in a national daily of India, The Hindustan Times, that even though there is absence of any formal Korean language education in Manipur, it is not uncommon to see that younger generation of Manipur using some Korean language expressions such as "Annyong hasseo" (Hello), "Sarang-heo" (Love you), "balli-balli" (fast) and "Autauke" (What to do). They have learnt these expressions from various Korean movies and dramas which are available in abundance here. It is really surprising that there are many youngsters in Manipur, who do not know Korean language but could sing Korean songs very well. ...read more.

In short, Manipur represents a strong case of Hallyu presence in India and the trend has been gradually spreading into other states of Northeast India. The phenomenon is significant because the presence of Hallyu in these states of India has neither any official support from the Korean or Indian governments nor they have any direct linkages with growing economic presence of Korea in India. The attraction of Korean cultural products has been sporadic and free from any official inducement in this region. The year 2013 will mark the 40th anniversary of the establishment of diplomatic relations between India and the Republic of Korea. Both India and South Korea will celebrate this year in a befitting manner. The year 2011 was be the Year of Korea in India and vice versa. There was a proposal to set up Korean language schools in many of the northeastern states. A Korean cultural centre is expected to come up in Delhi. KANCHAN SINGH SHEKHAWAT MA(EAS) SEM 4 ...read more.