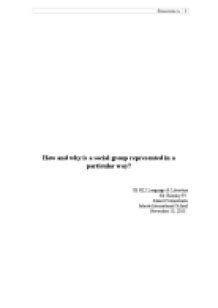 Pramoedya Ananta Toers 1981 &quot;This Earth of Mankind&quot; regards the unjust colonial rule of the Dutch East Indies through the segregation of social groups between the Dutch aristocrats, Mixed Bloods, and Natives.

﻿Suriawinata How and why is a social group represented in a particular way? IB HL2 Language & Literature Mr. Bilenky P5 Jesseril Suriawinata Jakarta International School November 13, 2013 ________________ Outline Chosen Text: This Earth of Mankind by Pramoedya Ananta Toer Part of Course: Part 3 Texts and Context Written Task 2 Question: Power and Privilege ? How and why is a social group represented in a particular way? My critical response will include: The Natives? inferior role?exemplified by Nyai Ontonorosoh?during Dutch colonization to underlie the unjust treatment, which suggests the author?s ideal to adopt Western influences whilst maintain the integrity of Indonesian tradition. * Natives? lack of Western education * Natives? tolerance to human trafficking * Natives? victimization in the justice system ________________ Written during the climax of Indonesian ignominy, Pramoedya Ananta Toer?s 1981 This Earth of Mankind regards the unjust colonial rule of the Dutch East Indies through the segregation of social groups between the Dutch aristocrats, Mixed Bloods, and Natives. Toer?s commentary on the Natives? role during Dutch colonization is portrayed as a metaphor through Nyai Ontorosoh?s experiences: her acceptance of European education, tolerance of promiscuous practices, and victimization in the corrupt law and justice system. ...read more.

An exception of the Native?s complacency is Nyai Ontorosoh who represents the strong-willed and educated morale Native during Indonesia?s colonial state. Toer uses Nyai Ontorosoh to depict the possibilities one could achieve with a Western education to fight for Indonesia?s autonomy. Natives, however, are tolerant to practices of prostitution illustrated by Nyai?s earlier surrender and automatic compliance when given orders. It is a metaphor to demonstrate that the Natives, with little to offer, would sacrifice their best merits to compensate for political progress. Nyai?s past as a Dutch administrator?s concubine supports Toer?s portrayal of the Native?s desperate search for respect. Nyai describes her ?purchase? as a ?simple ritual whereby a child was sold by her own father?, a testament to the extremes a Native will succumb to in order to obtain some sort of recognition, regardless of committing acts of ?shameful behavior? (Toer 84, 80). She had been coerced as a product of her father?s trade, treated as a ?bought slave? and ? a piece of livestock? (Toer 88, 87). ...read more.

The belief that ?natives are the equivalent of children born of a concubine? and should therefore make amends in the relative severity of their punishments, highlight the discriminatory justice system (Toer 290). Where a non-Native would receive ?exile from the Indies?, a Native would ?lose his freedom altogether? and denounce the option of a trial to begin with (295). Toer?s overt demonstration of the justice system negligence and discriminatory conditions over the Natives acts show the readers that the Natives were denounced of their civil right but they themselves should address the bias against them in order to redeem their innate freedom. This Earth of Mankind demonstrates the Natives? inferiority during Indonesia?s colonial state under Dutch rule. Pramoedya Ananta Toer emphasizes the Native?s low rank through the women?s resigned tolerance of prostitution, the disposal of their dignity, and the Dutch partisan government, all of which could?ve been averted if the Natives had valor and courage to claim their rights. Toer uses This Earth of Mankind to vocalize the necessity for Natives to indulge in modern education during a time of inequity of law and order, and exploitation of prostitution, and instead use it to dominate over foreign powers. ...read more.