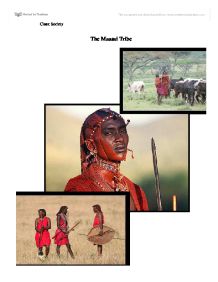 The Maasai Tribe of Africa. Gender superiority is the central figure of the Maasai culture as this way of life is what holds the culture together, preserving and preventing the tribe from becoming tainted. Maasai men and women are a semi- nomadic ethnic

The Maasai Tribe Figure: Gender Superiority Gender superiority is the central figure of the Maasai culture as this way of life is what holds the culture together, preserving and preventing the tribe from becoming tainted. Maasai men and women are a semi- nomadic ethnic group whom which are located in Kenya and northern Tanzania. It has come to my attention, that there is a clear distinction between gender identity, based on the different roles that the Maasai men and women partake in their day-to-day lives. In fact, it is evident that men are given the more praised roles and duties in comparison to women. From a very early age, boys are sent out with the calves and lambs as soon as they can toddle. Cattle are the mainstay of the traditional Maasai way of life, and their importance is embedded deep into the hearts and minds of these peoples; it is with great honor that only the boys come in contact with the calves from an early age. In contrast, the girls are responsible for domestic tasks, such as cooking and constructing homes for the people within the tribe. A girl's childhood is dominated by a strict avoidance, even a fear of her father and other elders. ...read more.

Child bearing is among the highest pressures upon a female. Each household within hundreds of miles must send female representatives to attend. One of the reasons for the fascination in regards to the Massai's appearance is due to their tall elegant muscular features or their fierce, brave, stubborn and arrogant reputation; or maybe because of their simple yet distinctive appearance with ochre covered warriors proudly holding their spear and wearing their bright colored beads around their neck. Gender equality can be found in the Massai tribe because both sexes wear earrings, and take pride in stretching large holes in their ear lobes. Despite the pain, it is a sign of beauty for women to have long stretched earlobes; one pulled front tooth and decorative cuts made on their faces for beauty. This lead me to raise the question of; How is the Maasai cultures strong emphasis on physical beauty, an example of the amount of impact physical appearance has on attraction and social behavior in this world today? It is evident from the sacrifices made, that women must go through pain and self torment to have any chance in being one of the Maasai warriors wives, on the contrary, what must the Maasai men do to please the Maasai women into a marriage? ...read more.

It is amazing how the slightest change can affect and potentially demolish ones culture into nothing. For example, our fluctuating mother nature is playing a big part in destroying the religious customs of this tribe. For instance, the earths changing atmosphere has put Africa into severe drought. Unfortunately this has lead to an extreme decrease in cattle population. As previously mentioned, cattle are everything for the Maasai: food, material, culture, ritual. With a usual 14-19 head of cattle per person, the Maasai are one of the wealthiest cattle-owning peoples in Africa. In monetary terms, they would easily be the richest tribe in Kenya if they ever sold all their stock. However, the cattle are becoming weak and dehydrated and are rapidly dyeing. This will result in the Maasai relying on their only other source of income, trading beaded jewelry on the international market. This means the Maasai men and women will become more exposed and dependent on the modern world and will not be able to stand-alone. This, in turn, will very slowly cause the loss of their independence and vanity, which currently is maintained by the gender superiority. This essentially means the figure that holds all the grounds of the Maasai culture together will crack, and the entire tribe will crumble. I can only hope that mother nature stays on our side and we wont have to witness such an interesting, beautiful, and magical tribe disappear from the face of this planet. ...read more.