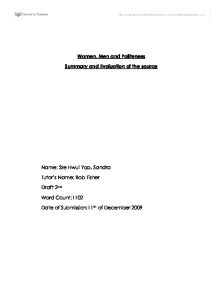 This is a summary of Women, Men and Politeness by Janet Holmes (2006). Holmes discusses the gender differences in the context of conversational politeness.

Women, Men and Politeness Summary and Evaluation of the source Name: Sze Hwui Yap, Sandra Tutor's Name: Bob Fisher Draft: 2nd Word Count:1102 Date of Submission:11th of December 2009 Summary This is a summary of "Women, Men and Politeness" by Janet Holmes (2006). Holmes discusses the gender differences in the context of conversational politeness. According to Holmes, women are generally more polite than men in verbal conversations. According to Coates (1989), women often search for agreement as an adopted strategy to a greater degree than men. Eckert (1990), meanwhile, states that women often make contributions and complete each other's sentences and agree with each other's opinion which gives an impression of a united undertaking. As Pilkington (1992) describes, conversations between men are combative typically and a kind of "verbal sparring". However, according to Gilbert and Stubbe (1991), positive agreements are used more often with the girls in the "single-sex" group than the boys but the differences are reduced in the "mixed-sex" group. The analysis shows that, overall, the boys use more 'bald' disagreements than girls in the types of preferred responses. ...read more.

Firstly, we can rely on the findings to the extent that only gender is involved. However, when other factors such as culture, religion, social background, economic background, education and influence of current media are considered, it would possibly result in different findings. Hence, further research is necessary because other factors have to be incorporated in the findings. Secondly, the text is not topical because it was written in 1996 and the patterns of society itself and social norms among men and women have changed over the years. Besides, some of Holmes' references are from the 1980s. In terms of culture, there are different norms and beliefs. Men in Britain are polite and often do not interrupt a conversation or give "bald" disagreements (Fletcher, 2002). For example, "please" and "thank you" are often incorporated in a sentence. Besides that, Asian cultures are meant to be polite. For example, the Japanese often greet each other with a bow and are often gentle in verbal conversations (Yuasa, 1998). "Aggressive and competitive verbal behaviour appears to be experienced as thoroughly enjoyable, and mutual insults may even serve as expressions of positive politeness and solidarity" This quotation suggests that aggressive and competitive interaction can be fun and create stronger bonds between people. ...read more.

This is because the program portrays an image that is supposedly "cool". The article did offer suggestions on why these differences of politeness between men and women might occur, which is " girls, overall, can be described as cooperative, generous and designed to allow the participation of everybody on equal terms ; boys were not so much competitive as unskilled in cooperative interaction" However, more research should be done on why these differences of politeness between men and women might occcur. In my opinion, the article is clearly written to a certain extent but there are parts which lack clarity such as "Their strategies for amusing each other were often to ridicule the previous speaker's utterance to put them down or to insult them". It does not show a clear explanation on the reason why men would use that strategy to insult one another. In conclusion, I think the text is biased and further research is necessary because women are always the "good guys" and there are no "good sides" to men. Besides that, the main sources from the referencing are mostly from females. Lastly, her findings are too general and different factors should be incorporated in her findings and research. ...read more.