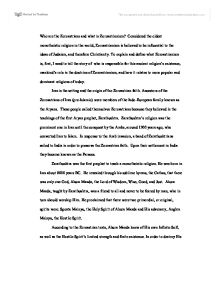 Who are the Zoroastrians and what is Zoroastrianism? Considered the oldest monotheistic religion in the world, Zoroastrianism is believed to be influential to the ideas of Judaism, and therefore Christianity. To explain and define what Zoroastrianism is, first, I need to tell the story of who is responsible for this ancient religion's existence, mankind's role in the doctrine of Zoroastrianism, and how it relates to more popular and dominant religions of today. Iran is the setting and the origin of the Zoroastrian faith. Ancestors of the Zoroastrians of Iran (pre-Islamic) were members of the Indo-European family known as the Aryans. These people called themselves Zoroastrians because they believed in the teachings of the first Aryan prophet, Zarathushtra. ...read more.

He proclaimed that there were two primordial, or original, spirits were: Spenta Mainyu, the Holy Spirit of Ahura Mazda and His adversary, Anghra Mainyu, the Hostile Spirit. According to the Zoroastrian texts, Ahura Mazda knew of His own Infinite Self, as well as the Hostile Spirit's limited strength and finite existence. In order to destroy His adversary, Ahura Mazda created an immaculate material world of the seven creations (sky, waters, earth, plants, cattle, man and fire) to trap the Hostile Spirit. Ahura Mazda knew that Anghra Mainyu, because of his destructive nature and ignorance, would attack the material world bringing with it disorder (falsehood, wickedness, sorrow, cruelty, disease, suffering, and death). ...read more.

of Iran. There are only a little over 100,000 Zoroastrians in the world today. Why so few? A person is not considered a "true" Zoroastrian unless he/she is born to two parents of the faith. Nor can members born into other faiths become Zoroastrian by choice; Zoroastrians believe everyone was born into a specific faith according to God's will. To help try and keep their religion alive, many Zoroastrians encourage young people to marry other Zoroastrians and preserve their heritage. Ultimately, the fate of the religion may come down to two simple changes: allowing non-Zoroastrians to willingly embrace and be accepted into the religion, and permitting the children of inter-faith relationships to call themselves Zoroastrians as well. ...read more.