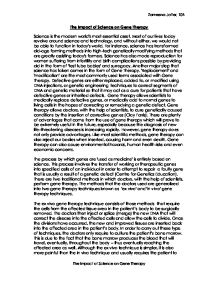 The Impact of Science on Gene Therapy Science is the modern world's most essential asset. Most of our lives today revolve around science and technology, and without either, we would not be able to function in today's world. For instance, science has transformed old-age farming methods into high-tech genetically modifying methods that are greatly assisting today's farmers. Science has also made reproduction for women suffering from infertility and birth complications possible by providing aid in the form of 'test tube babies' and surrogacy. Another major step that science has taken comes in the form of Gene Therapy. 'Replacement' and 'modification' are the most commonly used terms associated with Gene Therapy. Defective genes are either replaced, added to, or modified using DNA injections, or genetic engineering techniques to correct segments of DNA and genetic material so that it may act as a cure for patients that have defective genes or inherited defects. Gene Therapy allows scientists to medically replace defective genes, or medically add to normal genes to living cells in the hopes of correcting or remedying a genetic defect. Gene therapy allows doctors, with the help of scientists, to cure genetically caused conditions by the insertion of corrective genes (Clay Farris). There are plenty of advantages that come from the use of gene therapy which will prove to be extremely useful in the future, especially because the diagnosis of new life-threatening diseases is increasing rapidly. However, gene therapy does not only provide advantages. Like most scientific methods, gene therapy can also reject our bodies when inserted, causing harm and even death. Gene therapy can also cause environmental hazards, human health risks and even economic concerns. The process by which genes are 'used as medicine' is entirely based on science. This process involves the transfer of working or therapeutic genes into specified cells of an individual in order to attempt to repair a faulty gene that is usually a result of a genetic defect (Centre for Genetics Education). ...read more.

Some people feel as though anything gene-therapy associated is trying to give someone that is born with genetic deficiency or develops a terminal disease, like cancer, a chance at a normal and healthy life - and that outweighs all the disadvantages as this is a miracle all in itself. However, not everyone feels the same way because although gene therapy may seem like a gift from science, the risks involved in gene therapy are just as dominant as its benefits. After much analysis of the techniques used to perform gene therapy, many critics have come to realize that though gene therapy helps save lives, it still hits a road block from time to time when the therapies limitations are revealed. However evolving the techniques of gene therapy are, they still face difficulties. One of the techniques that faces a limitation is the technique of identifying the genetic fault in the patient's body. Approximately 2% of all illnesses (Huntingdon's disease or cystic fibrosis for example) are directly linked to a single faulty gene. This fact makes it extremely difficult for scientists and doctors alone to figure out exactly what the genetic defect is and if it even has anything at all to do with a genetic component that they can modify. The next technique that faces a limitation is delivering the new genetic material to a patient's cell and keeping it working. Gene therapy is continuously burdened by the difficulty of inserting genes into cells. At the moment, the most commonly used inserting methods are viruses. These include adenoviruses, lentiviruses, retroviruses and adeno-associated viruses. These viruses are used as 'vectors' to introduce the new, and modified, genetic material into the patient's body. The problem, however, is that vectors may trigger an immune reaction in the patient's body which would cause it to reject the inserted genetic material rendering it useless and ineffective. One of the biggest challenges that remains for gene therapy is the search for a reliable vector. ...read more.

It is no surprise that gene therapy is considered as a major breakthrough in medical science, but the world must not forget that, like every penny as two sides, it also has its potential for abuse, limitations, and commercial imperatives. Scientists and doctors alike must remember that is the human 'need' that is driving the progress of gene therapy and not the human 'want'. However, placing genes as the emphasis to determine health and disease will ultimately lead to suffering as the underlying causes will be neglected. The main aim to not restrict the society from being overcome by 'genetic determinism' or 'genetic thinking' and to keep them educated on the fact that they must try avoiding the pitfalls that they will face concerning gene therapy, while enjoying its benefits as well. Gene therapy has promised the world many benefits, no doubt, and they have definitely delivered their Although genetic therapy promises the world a lot of benefits, scientists still have yet to conduct in depth research and need to assess the potential risks that genetic therapy can cause. Not until scientists conduct studies and surveys to prove that genetic therapy is not a threat to human beings health and the worlds ecosystems, will the debate over the release of gene therapy ethics cease to exist. Despite the fact that gene therapy has a number of inviting benefits such as providing a cheaper substitute of medicine due to mass production, it is still debatable that living organisms like human beings are complex and thus tampering with such life forms can have unintentional effects. Fortunately, the worlds common interest is being supported by concerned scientists organizations who demand mandatory gene therapy trials before any permanent procedure is conducted. Just remember: a penny has two sides. Now it is up to you to determine heads or tails. ?? ?? ?? ?? Zameena Jaffer, 10B The Impact of Science on Gene Therapy ...read more.