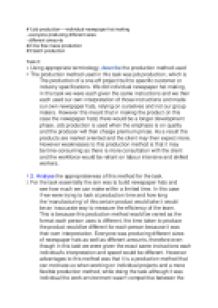 ﻿#1 job production----individual newspaper hat making - everyone producing different sizes - different amounts #2 line flow mass production #3 batch production Task 2: 1. Using appropriate terminology, describe the production method used 2. The production method used in this task was job production, which is The production of a one-off project built to specific customer or industry specifications. We did individual newspaper hat making, in this task we were each given the same instructions and we then each used our own interpretation of those instructions and made our own newspaper hats, relying on ourselves and not our group maters. However this meant that in making the product (in this case the newspaper hats) there would be a longer development phase. Job production is used when the emphasis is on quality and the producer will then charge premium prices. As a result the products are market oriented and the client may then expect more. However weaknesses to this production method is that it may be time-consuming as there is more consultation with the client and the workforce would be reliant on labour intensive and skilled workers. ...read more.

The labor doesn't require high skill, the focus would then be on quality control and consistent actions. This production method is most commonly used in factories with long conveyor belts routing the products through the different stay of products without a pause, therefore machines are the focus in this production method, because we can rely on them to produce the same standard each time. This production method would mean that labor costs are low and increase in orders can be handled due to efficiency. 7. 2. Analyse the appropriateness of this method for the task. 8. Using line production during this task was a much more efficient way of producing the newspaper hats because we found that in a shorter time we were able to make double if not more the amount of newspaper hats we made when we were using job production as a method. Each person was assigned a task that didn't need a lot of time nor thinking and therefore each person was only focused on that one task and this increased efficiency. In this case if we were a business we would be able to cater for large orders because of a much more efficient production process. ...read more.