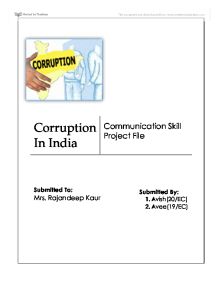 Corruption in India. This study focuses only on the corruption experienced by the Common Man in getting services from various service providers i.e. government departments. Citizens are entitled to receive these services, but are not only served po

Corruption In India Communication Skill Project File Submitted To: Mrs. Rajandeep Kaur Submitted By: 1. Avish(20/EC) 2. Avee(19/EC) Acknowledgement It is our privilege to express our sincerest regards to our project coordinator, Mrs. Rajandeep Kaur, for their valuable inputs, able guidance, encouragement, whole-hearted help and motivation for our project. I take this opportunity with much pleasure to thank all the people who have helped me through the course of my journey towards making this project on the topic "CORRUPTION IN INDIA". Apart from the subject of my research, I learnt a lot from him, which I am sure will be useful in different stages of my life. Last but not least I wish to avail myself of this opportunity, express a sense of gratitude and love to my friends and my beloved parents for their manual support, strength, help and for everything . Place: Phagwara Date: November 22 '10 CONTENTS Page No. Foreword 1.0 AN OVERVIEW 7 2.0 COVERAGE & METHODOLOGY 11 3.0 RANKING OF PUBLIC SERVICES 14 Analysis & Interpretation 4.0 RANKING OF STATES 17 5.0 MONITORY VALUE OF PETTY CORRUPTION 21 6.0 SERVICE PROVIDERS PERSPECTIVE 23 7.0 RECOMENDATIONS 26 8.0 QUESTIONNAIRE 30 9.0 BIBLIOGRAPHY 32 FOREWORD The aim of India Corruption Study 2005 taken up by Transparency International India in alliance with CMS, is to sensitize the people of India against all-pervasive corruption faced on day-to-day basis by the Common Man in eleven public services in twenty major states. The study is by no means exhaustive, as some states and services have not been covered. The other aim of the study is to recognize the good work being done in particular departments/ States where corruption levels have decreased and to share those success stories with other departments. An effort has also been made to suggest how the department concerned can improve service delivery and reduce corruption. This benchmark study will also help to track and study the impact of various initiatives like the recently passed "Right to Information Act", adoption of E Governance and various administrative reforms being undertaken across the country to improve service delivery and reduce corruption. ...read more.

This for two reasons, firstly, for most Need based services (except RFI) there are no alternatives sources to avail service unlike in the case of Basic services, where there are private service providers. Secondly, since most need based services are vested with substantial powers therefore the repercussions of not paying bribe could be quite serious. (Figures in Percentage of respondents) Among the 11 public services covered in the survey, the Police is the most corrupt. An overwhelming 80 % of those who had interacted with the department had paid bribe. Further three fourths of those who had interacted with Police department in the last one year are not happy with the services. No wonder then that 88 percent perceive the department to be corrupt. Judiciary (lower courts) and Land administration are the next most corrupt public services. In Judiciary, of those who paid bribe, 41 % had paid to influence judgment, 31 % to speed up or delay judgment, 28 percent to get routine jobs like listing of case or to get copy of documents. In Land Administration, of those who paid bribe, nearly half had paid for property transaction related issues (valuation of property, payment to registrars etc), 36 percent paid to get property documents or for mutation and 12 percent for clearing or settling tax dues. In Municipal Services, nearly three fourth of those who paid bribe for approval of building plan or modifications (53%) and tax related issues (22%). Nearly two thirds of people surveyed perceived that the Income Tax department to be corrupt. In spite of this the department is low in the Corruption Index score. This is because the survey was limited to individual assesses who had apparently not encountered much corruption. Among Basic services the Government Hospitals are the most corrupt public services. The corruption in the department is mostly to do with non availability of medicines, getting admission into hospitals, consultation with doctors and availing of diagnostic services. ...read more.