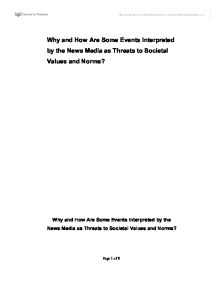 Do newspapers have a future in the digital era? Drawing on examples, explain the strategies for change and survival adopted in different sectors of the British Press.

According to Kitzinger in The Ultimate Neighbour From Hell? The Media Representation of Paedophilia, "innocence is a powerful and emotive symbol, but to use it to provoke revulsion is counter-productive". This is effectively what the news media is achieving with the case of Baby P, a counter-productive reaction to innocence, to create a synchronised annoyance throughout Britain. It also uses the interruption to the Babies innocence on a level to horrify people, to the point where they want to hear more and know the details. This has had effects such as hate groups, naming and shaming and in particular up-roar over the effectiveness of the Social Services. Stan Cohen argued that the media has the ability to "exaggerate" a localised social situation, into a nationwide panic. He was referring to the fight of the Mods and Rockers in 1964, which happened in small seaside town, Clacton-upon-sea. Cohen named the separate groups "folk devils". A good current example of this would be the bird-flu epidemic (a folk devil), as it was widely publicised, and people did begin to panic, to the point where the sales of Turkeys for Christmas dinner were drastically affected. However, even though there have been outbreaks in the UK of bird flu among birds, no humans have been affected by the virus. This is reflective of how the idea of a threat to society can affect the way people act, effectively scaring people into a reaction. ...read more.

Papers are there to entertain, and people enjoy bad news, more than they enjoy positive news. Another reason news media often put a spin on, or exaggerate stories, is because it is what is demanded of the audience. It is not surprising that when a celebrity is caught taking drugs or acting anti-socially, they get widely publicized. Celebrities and negativity are two big sellers for the newspapers. An example of this would be the mass coverage Britney Spears received when she shaved her head. The news media has a way of taking a situation, and placing a spin on the event or story, that can often be misconstrued through exaggeration and elaboration. It could be anything from something someone has said, to an event or situation. The Hypodermic Needle Theory suggests that the media "inject" these ideas of societal values and norms into the mind of the audience. So when the news media report a change to those norms, it causes a reaction. One of the most effective ways the news media targets the audience is through emotions, for example the harming of innocence, or threat of a new disease (Aids, Super-bug, bird flu) or even just a threat to safety. All in all, bad news sells, and this is why the news media push issues for as long as they can. It is debateable that moral panics are a creation of the news media. Without the news and mass media, people would be uninformed, and situations such as moral panics, would not exist. ...read more.