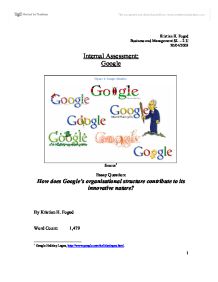 How Does Google's Organisational Structure Contribute to its Innovative Nature?

Kristian H. Foged Business and Management SL - 2.U 30/04/2008 Internal Assessment: Google Source1 Essay Question: How does Google's organisational structure contribute to its innovative nature? By Kristian H. Foged Word Count: 1,479 Contents: Page Introduction 3 Organisational Theory and Design 3 Motivation 4 Innovative Nature 5 Conclusion 6 Bibliography 7 Introduction "Google's mission is to organize the world's information and make it universally accessible and useful.2" This is probably one of, if not the, most ambitious mission statement for any company worldwide. Shockingly, however, it seems that this statement may be feasible. On its path to achieving its mission statement, Google has managed to pull in all the stops and has tried to provide every service it can think of to its consumers. By providing a range of services and a diversity of types of information online, Google has been named the most innovative company of 2007 by Fast Company magazine3. And through its radical working environment, facilities and services open to its employees it has also been acknowledged as the number one place to work by Fortune Magazine4 the past two years. With two acknowledgements as large as those the question that I will try to answer in the following essay is how does Google's organisational structure contribute to its innovative nature? I will look into organisational theory, find how Google organises its staff and try to build an understanding of the innovative nature that surrounds Google. ...read more.

Motivation Google's approach to staff motivation has many similarities to the ideas of the Human Relations School (HRS). The main perks of working at Google, apart from the salary, are all the free benefits to be had within the Googleplex; as an employee you have free access to everything from food to medical care, a gaming room to a gym with swimming pool to massages, all accessible from the office. This "fun" working environment goes a long way with Google's staff motivation; as mentioned earlier it was named the best company to work for in 2007 (see introduction). If we consider the Herzberg's Two-Factor Theory, Google meets most of the criteria under the motivator's area (See diagram below). However, the key criticism made by a former employee9 is that there is not much room for Promotion Opportunities at Google; "There is no career development plan from individual contributor to manager." Due to Google's idealism that hierarchy is bad it does not supply a key motivational aspect to its staff. Source10 Innovative Nature "The marvel of Google is its ability, after 10 years, to continue to instil a sense of creative fearlessness and ambition, even as it has grown to more than 16,000 employees. Prospective hires are often asked, "If you could change the world using Google's resources, what would you build?" ...read more.

Having a popular website also allows the freedom of expanding in many directions, as we all know there are not many things that can not be found online in this day. Conclusion Google's has developed a unique form of organising its staff that has proved beneficiary to its development. In spite of its growth, it tries to retain the small start-up company ideals when it comes to developing new ideas and services. Of course, when innovation is somewhat dependent on staff ideas, the company becomes dependent on how many good minds it can attract, as well as keeping them motivated and engaged. Even though Google staff is given 20% time for a personal project, it is far from every person that will come up with a new service that ends up being used. Though Google's organisational structure is a key factor towards its innovation, there are others that are, arguably, more important. It should not be ignored that some of Google's key innovations, such as YouTube.com and Google Earth, are acquisitions, as well as the expansion opportunities credited to the World Wide Web. It should also be noted that it still only has one, though very effective, source of income; advertising. However, Google has had ideas such as G-Mail, Google News, etc... Formed as a result of its innovative staff organisation and has through them, as well as other services, grown at a rapid rate and become one of the worlds most valued corporations. ...read more.