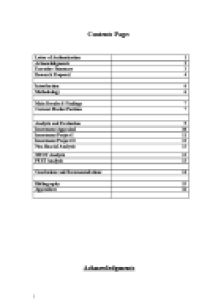 Should easyJet further penetrate the market for air travel between the UK and Greece? If yes, should the expansion plan be organic or via a takeover?

﻿Contents Page: Letter of Authentication 1 Acknowledgments 2 Executive Summary 3 Research Proposal 4 Introduction 6 Methodology 6 Main Results & Findings 7 Current Market Position 7 Analysis and Evaluation 9 Investment Appraisal 10 Investment Project I 11 Investment Project II 12 Non-finacial Analysis 13 SWOT Analysis 13 PEST Analysis 13 Conclusions and Recommendations 14 Bibliography 15 Appendices 16 Acknowledgments I would like to acknowledge and thank: 1. Mr Giannis Dardoufas, easyJet Athens Station General Manager for his time and important data he offered during the interview. Executive Summary The management and main shareholders of easyJet plc. have recently expressed interest in growing their business considering the increased demand for private healthcare and more specifically diagnostic services in Greece. As the operational core of the business focuses on this market segment, the report analyses: ?Should easyJet plc. further penetrate the Greek market? If yes, should the expansion plan be organic or via a takeover?? The first part of the report deploys the research proposal which presents the research rational, the theoretical framework as well as the methodology followed. Following, an introductory note outlines details of the company as well as sketches the hypothesis of the research. The analysis part is based on both primary and secondary research in the form of personal interviews with the top management (Figure 3), collection of financial reports, and independent sector analysis from the largest market research company in Greece. These data allowed for a detailed evaluation on a financial level (Investment Appraisal and Corporate Financial Analysis) and on a non-financial level (SWOT, PEST). The conclusions part deploys an assessment of the two possible investment options for easyJet plc. On the one hand, there is a long term, heavy investment project of investing on a large competitor while on the other hand; there is the option of launching a new diagnostic centre anew. Although the ?new location? project returns a positive NPV compared to the ?Equity Purchasing? which returns a lower NPV, it is important to consider the long term strategic plan of the company and the non-financial analysis. ...read more.

A more cautious capacity approach has also been evident in Europe, but consolidation has helped individual carrier growth. Vueling's merger with fellow Barcelona budget operation Clickair enabled the former to grow its share, but both carriers had markedly scaled back capacity prior to the tie-up. Elsewhere carriers have moved into gaps created by low-cost carriers casualties, for example central Europe's Wizz Air benefiting from the collapse of SkyEurope and Ryanair moving into former MyAir bases in Italy (FlightGlobal, 2010). They also continue to heap pressure on retrenching network carriers, where Association of European Airline members carried 20 million fewer passengers in 2009, expanding in key markets. By contrast, passenger numbers across European Low Fares Airline Association members were 8.7% higher at 162.5 million in 2009 (FlightGlobal, 2010). European low-cost operators continue to push the envelope on ancillary revenues, growing in a diverse range of directions. But Ryanair's ambitions to use mobile telephony as the platform for a range of additional future services have taken a hit by the recent decision of its service provider OnAir to walk away from a deal to equip its full fleet (FlightGlobal, 2010). Analysis/Evaluation Having explored the environment in which easyJet plc. operates and despite several challenges it faces on the external environment, it is a well established, successful and profitable organization, that now faces the opportunity for further development and market penetration. This penetration is to be achieved by following one of two obvious courses. The first project opportunity, involves organically launching the new route from London to Volos. The second option represents investing into another, existing, major player in the Greek market, HellasJet. Specifically, the latter option would correspond to the purchase of 22% of the larger company?s equity, on the stock exchange. In order to further evaluate which course of action would prove to be the most beneficial, it is necessary to carry out an assessment of the financial as well as the non-financial factors that influence such a decision. ...read more.

A key issue will be the extent to which technological advancements ? such as the use of the Internet on distribution and cost synergies from industry consolidation ? can offset upward pressures on prices and costs. Conclusions and Recommendations According to the findings, the corporate management of easyJet plc. will make a decision according to the business strategy that has formed for the company?s future. More precisely, if the management wishes to proceed with a long term and relatively higher investment, then the optimal choice would be the organic growth option. This is due to the fact that it requires a substantially higher start up cost and is expected to return that investment in a longer term period. On the other hand, if the management wishes to make a relatively shorter term investment, acquiring a stake in rival HellasJet S.A., requires a lower amount of money, a shorter term return for the investment. Consequently, launching a new operation would be more favourable. The non- financial analysis illustrates that easyJet plc. may be better off purchasing the competitor since it will also eliminate competition and assist in gaining a higher share of the market. The findings of the financial analysis (investment appraisal) somewhat conflict the findings of the non-financial factors. It would therefore be beneficial to carry out a more extensive financial analysis for each scenario, covering a longer investment period and providing a greater amount of cost data. This would enable a more accurate comparison of the two investment options, as they each contain a very different initial outlay. Also, it may be helpful to adopt other methods of investment appraisal such as the Accounting Rate of Return, which are less sensitive to fluctuations in future Cash Inflows. This way, with more information that contains more detail, the management of easyJet plc. can weigh the advantages and disadvantages of each project in a clearer and a more precise way. ...read more.