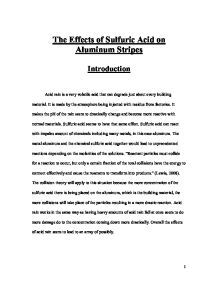 The Effects of Sulfuric Acid on Aluminum Stripes Introduction Acid rain is a very volatile acid that can degrade just about every building material. It is made by the atmosphere being injected with residue from factories. It makes the pH of the rain seem to drastically change and become more reactive with normal materials. Sulfuric acid seems to have that same effect. Sulfuric acid can react with impales amount of chemicals including many metals, in this case aluminum. The metal aluminum and the chemical sulfuric acid together would lead to unprecedented reactions depending on the molarities of the solutions. "Reactant particles must collide for a reaction to occur, but only a certain fraction of the total collisions have the energy to connect effectively and cause the reactants to transform into products." (Lewis, 2008). The collision theory will apply to this situation because the more concentration of the sulfuric acid there is being placed on the aluminum, which is the building material, the more collisions will take place of the particles resulting in a more drastic reaction. ...read more.

2. measure out five gram stripes of aluminum thirty times using a triple beam balance scale ad a weighing tray.(be sure to minus the weight of the weighing tray to avoid flaw in data.) 3. Place three 100mL beakers in the experimental zone and fill them with 1 molar 2 molar and 3 molar solutions of sulfuric acid and place a pipette in each 100mL beaker. 4. Once you have measured out thirty stripes divide them into three sets of ten stripes each. place one of each in a party dish then use a stop watch to count twenty seconds from when you inject ten drops of sulfuric acid of 1 molar 2 molar and 3 molar onto the aluminum stripes in the party dishes. 5. Once the twenty seconds is over take each stripe and place it on the triple beam balance scale in a weighing tray and measure the terminal amount of aluminum left after the reaction. 6. Record the data onto a table so you can use it for future use. Work Sited 1. "Collision theory." Ferlex. 2 July 2008. 31 Jan. 2009 <http://encyclopedia.farlex.com/Collision+theory>. ?? ?? ?? ?? 1 ...read more.