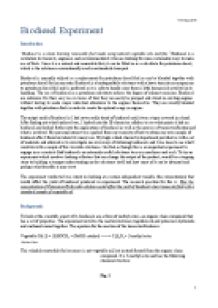 Biodiesel Investigation - How the concentration of Potassium Hydroxide solution would affect the yield of biodiesel when transesterified with a standard sample of vegetable oil .

﻿11th May 2015 Biodiesel Experiment Introduction ?Biodiesel is a clean burning renewable fuel made using natural vegetable oils and fats.1 Biodiesel is a revelation to chemists, engineers and environmentalists who are looking for more sustainable ways to make use of fuels. Since it is a natural and renewable fuel, it can be fitted in as a substitute for petroleum diesel, which is the substance conventionally used in automobile transport. Biodiesel is normally utilised as a replacement for petroleum diesel fuel or can be blended together with petroleum diesel fuel in any ratio. Biodiesel is a biodegradable substance with a lower toxicity in comparison to petroleum diesel fuel and is preferred as it is safer to handle since there is little human risk involved in its handling. The use of biodiesel as a petroleum substitute reduces the degree of exhaust emission. Biodiesel are notorious for their easy use in terms of how they can easily be pumped and stored in existing engines without having to make major industrial alterations to the engines themselves. They are usually blended together with petroleum fuels in order to create the optimal usage in engines. The output yield of biodiesel is I had never really heard of biodiesel until it was a topic covered in school. After finding out what biodiesel was, I looked into the IB chemistry syllabus to see what points it had on biodiesel and looked further into the applications of biodiesel as well as the process of transesterification and what is involved. My personal interest was sparked from my curiosity of how to obtain my own sample of biodiesel after I found out about its many uses. My high school chemistry department provided us with a set of materials and allowed us to investigate our own ways of obtaining biodiesels and I was keen to see what I could do with a sample of this versatile substance. ...read more.

To improve on this and reduce this uncertainty, a combustion test would need to be done on the biodiesel, as it is known to be flammable. The unknown substance should be tested with a flame test and if it burns, should be included in the yield measurements of biodiesel. Using Apparatus with a lower uncertainty for measuring out KOH - methanol substance The 10ml measuring cylinder used had an uncertainty of 0.2, which for 1.5cm3 of solution, was extremely high as a percentage uncertainty. Since this was used for all tests, it must be noted that this was also a contributing factor to the systematic error obtained for each test. To improve this, a different (more precise) piece of measuring apparatus, i.e a burette should?ve been used as it has an uncertainty of 0.05, which would?ve quartered the uncertainty on the potassium hydroxide mixture, and reduced the total uncertainty. Improper placement of beaker on magnetic stirrer Due to time limitations for conducting the experiment, multiple groups had to share the stirrer and therefore place two beakers with magnetic flea?s (capsules) atop the stirrer. This interfered with the ability for the maximum biodiesel output to be produced for each result, and since this only occurred for certain tests, would?ve contributed to any random errors present. To target this limitation, the best solution would be to find time to work on the experiment individually, so that the magnetic stirrer could be used for only one beaker. Impurity on biodiesel The substance measured may not be entirely biodiesel, but instead a mixture of biodiesel and glycerol that may have been extracted without notice. This would?ve caused a higher percentage yield of biodiesel to be measured rather than the actual amount. To add on to this limitation, the reason for an impurity would most probably be from a difficulty in distinguishing between the biodiesel and layer of glycerol. Any filtration process that could separate the biodiesel and the glycerol effectively, would be appropriate. The mixture should undergo centrifugation multiple times in order to separate the layers more clearly. ...read more.