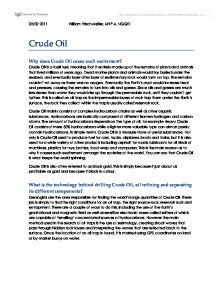 Crude Oil Why does Crude Oil cause such excitement? Crude Oil is a fossil fuel, meaning that it entirely made up of the remains of plants and animals that lived millions of years ago. Dead marine plants and animals would lay buried under the seabed, and eventually layer after layer of sedimentary rock would form on top. The remains couldn't rot away as there was no oxygen. Eventually the Earth's crust would increase heat and pressure, causing the remains to turn into oils and gasses. Since oils and gasses are much less dense than water they would rise up through the permeable rock, until they couldn't get further. This is called an oil trap as the impermeable layers of rock trap them under the Earth's surface, the rock they collect within the trap is usually called reservoir rock. Crude Oil mainly consists of complex hydrocarbon chains as well as other organic substances. Hydrocarbons are basically composed of different isomers hydrogen and carbon atoms. The amount of hydrocarbons depends on the type of oil, for example Heavy Crude Oil consists of mere 50% hydrocarbons while a lighter more valuable type can almost purely contain hydrocarbons. ...read more.

to a tanker terminal or all the way ashore, which is one of the main reasons as to why oil refineries are often located near seas another reason is because of the huge amount of steam used during the process of cracking hydrocarbons. An oil refinary is an industrial process plant where Crude Oil is processed and refined into more useful substances, such as gasoline, diesel fuel, asphalt base, heating oil, kerosene, and liquefied petroleum gas. The oldest thus most common way of separating Crude Oil into various different more useful substances (fractions) is through the process of fractional distillation, although newer techniques have been developed including the method of Chemical Processing, which allows further breakdown of hydrocarbons possible. Components of Crude Oil have different sizes, weights and boiling temperatures. Ergo, the first step for Crude Oil in a refinery is to be broken down into smaller less complex hydrocarbons. Fractional distillation is used as it works on that exact principle, that different substances have different boiling and melting points: 1. The Crude Oil is heated to a high2 temperature, about 600 degrees Celsius. This is usually done with a tremendously high pressure of steam. ...read more.

Oil leaks and spills can destroy ecosystems, and the extraction of Crude Oil requires lots of space, a problem solved by chopping down the rainforest. Another mayor problem with crude oil is the fact that it is an unrenewable source, scientists predict that we only have enough Crude Oil for about 30-40 years. What will we do when the non-renewable sources of oil will dry out? What alternatives do we have? Although technically Crude Oil is a renewable source it isn't because of the fact that we are using it at a much faster rate than nature can is capable of producing it. As I mentioned scientists have estimated that if we keep using Crude Oil in such high quantities we only enough crude oil for about 30-40 years, which means that we have to come up with an alternative fast. A possibility would be to rely on coal, which too is a non-renewable source but is has been predicted that there is enough of it for a good 300 years. But what will we do then, well hopefully we will have had the time to fully develop solar, wind and other types of renewable energy. Right now scientists are trying to figure out other possibilities, some of which used the idead of compressed hydrogen as a fuel. ...read more.