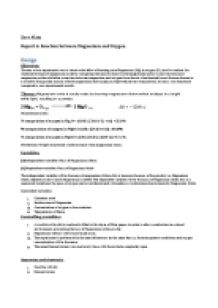 Discovering the formula of MgO

﻿Zara Alam Report 6: Reaction between Magnesium and Oxygen Design Objective: The aim of our experiment was to observe the effect of burning pure Magnesium (Mg) in oxygen (O2) and to confirm the chemical formula of magnesium oxide by comparing the masses of pure solid magnesium (prior to any reaction) and magnesium oxide solid after a reaction between magnesium and oxygen from the air when heated from a Bunsen burner in a crucible. Using molar masses of both magnesium and oxygen, an expected percent composition, by mass, was found and compared to our experimental results. Theory: Magnesium oxide is easily made by burning magnesium ribbon which oxidizes in a bright white light, resulting in a powder. 2 Mg(s) + O2 (g) 2 MgO (s) ?H = ?1204 kJ Theoretical work: % composition of oxygen in Mg2O= 16.00/ ((24.01*2) +16) =25.0% % composition of oxygen in MgO=16.00/ (24.01+16) =40.0% % composition of oxygen in MgO2=16.00/(24.01(16.00*2))=57.1% Prediction: Weight of material would increase when magnesium burns. Variables: (i)Independent variable: Mass of Magnesium ribbon (ii)Dependent variable: Mass of Magnesium Oxide The independent variable will be the mass of magnesium ribbon, this is because the mass of the product i.e. Magnesium Oxide, depends on how much Magnesium is added. ...read more.

Don't let this happen. Keep heating and lifting the lid until you see no further reaction. At this point, remove the lid and heat for another 8-10 minutes, until all the magnesium has turned into a white powder. Turn off the Bunsen burner and allow the apparatus to cool. Re-weigh the crucible containing the product. Filter paper will burn and ashes are supposed to weigh nothing. The experiment was repeated four times for accurate results. Data Collection and processing Raw Data: Serial No. Mass of Magnesium(g)±0,001g Mass of crucible without lid(g)±0,001g Mass of crucible with product(g)±0,001g 1 0,058 10,864 10,954 2 0,101 10,864 11,027 3 0,086 10,864 11,002 4 0,076 10,864 10,984 Observation: Original: The piece of Mg ribbon we took was silver-black. Experiment done by holding the Mg ribbon above the Bunsen flame: The Mg ribbon no longer stayed into one piece and it turned white black. Experiment with more controlled conditions: Once the magnesium was in the crucible and was being heated by the Bunsen burner, it glowed for a brief time. It then caught fire before the lid was placed on top. ...read more.