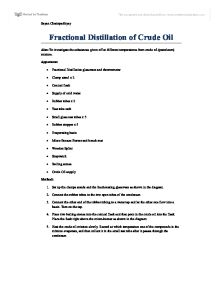 ~ 250 Brownish - black High Viscosity Conclusion: These results prove to us that firstly, crude oil being a mixture of several hydrocarbons, that the mixture provided was a simulation. Secondly, there are noticeable trends in the hydrocarbons. As the molecules gets heavier and heavier, by which I mean that we go from pentane to Hexane and so on, the viscosity of the compound increases, as well as the time taken for it to burn up completely. The boiling point also increases. These hydrocarbons belong to the first organic homologous series: Alkanes. Alkane molecules are completely saturated and each carbon atom has at least 2 hydrogen atoms attached to it. Apart from the two end carbon atoms, the other ones are attached to two other carbon atoms each. ...read more.

Also related to the viscosity, the weight of each hydrocarbon also increased as the viscosity increased. By the time kerosene was being handled, a really wide margin of difference could be felt from pentane. Evaluation: Weakness Improvement 1 The equipment available was not enough to determine the boiling point of Kerosene Get a macro burner and heat the kerosene to its boiling point 2 The difference in viscosity between the first two hydrocarbons was hard to tell Measure the poise of the two compounds and record the difference 3 The evaporating basin in which the hydrocarbons were heated was the same all throughout Use a different evaporating basin for each compounds so that the heat from the previous test does not affect the next test 4 The main mixture provided to us was not actual crude oil, simply a simulated substitute To gather all of the compounds found in crude oil use a mixture which contains all of them kind of obvious Sayan Chattopadhyay ...read more.