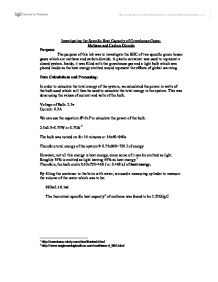 Investigating the Specific Heat Capacity of Greenhouse Gases: Methane and Carbon Dioxide Purpose: The purpose of this lab was to investigate the SHC of two specific green house gases which are methane and carbon dioxide. A plastic container was used to represent a closed system. Inside, it was filled with the greenhouse gas and a light bulb which was placed inside as the heat energy emitted would represent the effects of global warming. Data Calculations and Processing: In order to calculate the total energy of the system, we calculated the power in watts of the bulb used which will then be used to calculate the total energy in the system. This was done using the values of current and volts of the bulb. Voltage of Bulb: 2.5v Current: 0.3A We can use the equation W=IxV to calculate the power of the bulb. 2.5x0.3=0.75W or 0.75Js-1 The bulb was turned on for 16 minutes or 16x60=960s Therefore total energy of the system--> 0.75x960=720 J of energy However, not all this energy is heat energy, since some of it can be emitted as light. ...read more.

16.5 25.1032239746 26.5 24.9872617978 Graph of Time versus Temperature of System Calculation for Methane: Since we are dealing with methane which is a gas we can use the formula to calculate the actual heat energy of the system. However, we need to calculate the mass of methane gas using the formula We know that the density of methane gas at SATP (standard ambient temperature and pressure) is 0.717 kg/m3 Therefore, We can now use the formula (24.8-25.4) = (-0.6) =kJ = We are to assume that the container is not an enclosed system so heat is lost to the surroundings, therefore: Heat lost= (theoretical heat-actual heat) = 0.468kJ- Therefore the percentage deviation is = =99.8% deviation from theoretical value. Calculation for carbon dioxide: Below is a graph showing change in temperature over a period of 30 minutes. A similar process was carried out using a sample of carbon dioxide. The same light bulb was used for the same period of time meaning that the theoretical heat energy of the system is the same. In calculating the heat absorbed by the carbon dioxide, we used the same process of calculations. ...read more.

We could have subtracted the values; however, for example it would be impossible to measure the volume taken by the wire and so on, so it was simply assumed that the entire container was filled with the gas. Thirdly, we had to hold the circuit together manually, so there were times where the circuit got disconnected and the bulb was off. This happened several times, reducing the overall heat energy emitted by the bulb. More specifically, a major human error was that we had placed the temperature probe slightly too early whilst the carbon dioxide was still ice. The data would have been more accurate if we had waited for the carbon dioxide to completely sublimate into gas. A final improvement that could be made is that we should have fixed bulb onto the lid of the container because we noticed that the temperature reader was either completely covered in the ice (regarding carbon dioxide) or either completely on the side of the bulb meaning that the temperature probe was not exposed to a balanced temperature change. This can be improved by somehow placing the bulb on the lid of the container so that there is an even distribution of heat emitted by the bulb. ...read more.