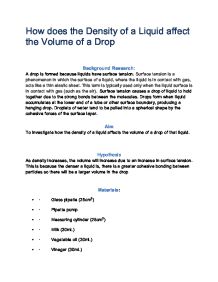 How does the Density of a Liquid affect the Volume of a Drop Background Research: A drop is formed because liquids have surface tension. Surface tension is a phenomenon in which the surface of a liquid, where the liquid is in contact with gas, acts like a thin elastic sheet. This term is typically used only when the liquid surface is in contact with gas (such as the air). Surface tension causes a drop of liquid to hold together due to the strong bonds between the molecules. Drops form when liquid accumulates at the lower end of a tube or other surface boundary, producing a hanging drop. Droplets of water tend to be pulled into a spherical shape by the cohesive forces of the surface layer. Aim To investigate how the density of a liquid affects the volume of a drop of that liquid. Hypothesis As density increases, the volume will increase due to an increase in surface tension. This is because the denser a liquid is, there is a greater cohesive bonding between particles so there will be a larger volume in the drop Materials: � � Glass pipette (25cm3) ...read more.