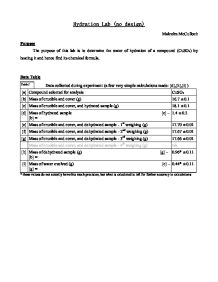 However, the literature value was 5 moles of oxygen for every 1 mole of CuSO4 (Copper [II] Sulfate Pentahydrate - CuSO4 � 5H2O). As calculated above in Data Processing, this means that the percentage deviation from the literature value was 20%. This is significantly less than the percentage uncertainty, which was 37%. This should indicate that the random error was higher than systematic error, because while there was a high level of uncertainty, the literature value still falls within that value, meaning that the measurements were close enough. In reality, though, this high level of uncertainty says more about the inaccuracy of the measuring equipment than it does about the amount of systematic error. For example, it is possible that simply not all of the water was removed from the compound. On the contrary, the lab procedure instructed to continue trials of heating the compound and weighing it until the mass values were within 0.05g of each other. Those in this lab were only 0.01g apart - a difference which would not have affected the outcome of the lab. ...read more.

Improving the Investigation This lab did not meet its goal, hence definitely should be improved. The simplest change that could be made is to use the more precise scale from the beginning of the experiment. This would reduce the percentage error down to 6.7%, a much more reasonable value. This, however, does not solve the problem of the inaccurate value determined, because it is unlikely that this scale would have been any more accurate, despite being more precise. It is hard to pinpoint, therefore, exactly where the experiment went wrong, as it seems that the scales were not at fault but that a sufficient amount of water had been removed. There was certainly some kind of systematic error. One way that this error might be reduced, even without understanding its source, is to increase the amount of substance measured. Because the lab is about obtaining a ratio, this would not affect the result at all except hopefully to decrease the effect of any systematic error. This would, however, have the disadvantage of making the lab take longer, and steps might need to be added to ensure that all of the compound has a chance to dehydrate. ...read more.