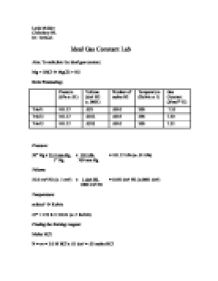 When looked at closely the Magnesium strip is clearly reacting and decreasing in size. Conclusion: From this experiment, the ideal gas constant was determined using the equation PV= nRT. Using this equation should have resulted in a rather accurate constant because the pressure was retrieved from weather.com, which is as far as we know, a reliable source. The volume is measured on the eudiometer, which has an uncertainty of .0001 in dm(, which is a very low uncertainty that shouldn't be a dominant factor in the unreliability of the data. The amount of moles are calculated by hand using the mass of the magnesium. The magnesium was weighed with an inaccurate scale because the uncertainty is .005 grams rather than .001 grams on most scales. The temperature has an uncertainty of .5 K which is also very high because the temperature is measured on a thermometer that is hard to read (which would be a random error), and imprecise. ...read more.

According to the method, the inversion had to be done quickly, as the stopper was held tight, and the eudiometer kept still after it was inverted. This however, was quite difficult and errors may have occurred in the process. The last possible error could have occurred due to an incomplete reaction. To release any trapped bubbles, you had to tap the side of the cylinder, but miniscule bubbles continuously were released for an extra few minutes. This makes it unclear whether or not, bubbles could have continued for even longer. Improvement: After evaluating the method, it is clear that there are a few aspects of the method that can be improved. First, the dropping of the HCl must be done more carefully next time. Secondly, the eudiometer must be inverted into the water with more precision, as well as care. Thirdly, it must be certain that the magnesium is fully reacted before results are recorded. ?? ?? ?? ?? ...read more.