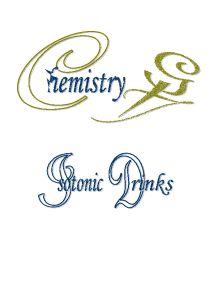 Aim To investigate which energy drink contains a higher concentration of electrolytes Background Knowledge Electrolytes are nutrients that affect the fluid balance in our bodies and are required for the nerves and muscles in our body to function. When electrolytes dissolve, they produce ions that carry electrons from one electrode to another. The more soluble a substances is, the stronger the electrolyte is. The main electrolytes needed by the body are sodium, potassium, calcium, magnesium, chloride, bicarbonate, phosphate and sulphate. As an athlete exercises their body sweats to maintain its core temperature of 37 degrees centigrade. Thus as the body is loosing water through sweating, the athlete is essentially loosing electrolytes as these are contained in the water. If the athlete loses 2% of his body weight as sweat then they will suffer from impaired performance. A 10% loss results in circulatory collapse and heat stroke. So it is important that the athlete drinks something that will hydrate them and will replace lost electrolytes. Sodium and potassium are the most common electrolytes added to the ever-increasing variety of sports drinks. ...read more.

solution to the isotonic drink so that a visible current change could be observed. After the first experiment we carried out another experiment with no NaCl so as to show that in a chemical electrolysis both ions are needed but in our bodies this is not the case. In essence to see if there is a real difference we also tested distilled water i.e the control in the experiment Hypothesis Our experiment thus investigates the ions in the isotonic drink and as sodium is present in almost all our drinks we hypothesized that: The More the electrolyte the isotonic drink contains the higher the initial current observed" We predict that Red Bull has the highest electrolyte concentration followed by Coca Cola, lucozade and finally fruit Juice With this s our prediction, we moved on to do the experiment Apparatus * Ammeters * Milli-Ammeters * Electrical wires with crocodile clips * Graphite electrodes (20) * Tissue * Beakers * Round bottomed flask (25ml) * Measuring Cylinder (25 cm3 and 10cm3) * Power pack (AC-DC converter) Electrolytes * Coca cola * Fruit juice * Lucozade * Red Bull * Distilled water * 1 molar Sodium * chloride Procedure * Step 1 We ...read more.

It was also considered as a control and thus the difference in the first and second experiments Hence technically red bull was the best electrolyte from the drinks examined. We concluded this because it had the highest reading in both the experiments Our experiment was a success and the results were satisfactory as we could not get literature values to check our results. If we had these values and hey were almost the same as ours then we would classify our results as excellent Conclusion and Recommendation We thus proved our prediction and our hypothesis in that RedBull had the highest concentration of electrolytes. However we were proved wrong about the Coca Cola as lucozade had the second highest concentration. These were the best two best drinks. However we recommend lucozade as Red Bull has explosive amounts of caffeine and long term use can be harmful to the body The next best isotonic drinks were; fruit juice and coca cola. Both had the same number of electrolytes and thus we recommend fruit juice over Coca Cola. This is because fruit juice is more nutritious and helpful to the body. Acknowledgements Nick Josephine Yvette Hashim Faith ...read more.