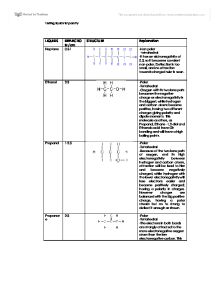 LIQUIDS DEFLECTION /cm STRUCTURE Explanation Heptane 0.5-1 -Non polar -tetrahedral -It has an elctronegativity of 0.3, so it becomes covalent non-polar. Deflection is too small, and no attraction towards charged ruler is seen. Ethanol 2-3 -Polar -Tetrahedral -Oxygen with its two lone pairs becomes the negative charge as electronegativity is the biggest; while hydrogen and carbon atoms become positive, having two different charges giving polarity and dipole moments. This molecule as others, as Propanol, Ethane -1,2-diol and Ethanoic acid have Oh bonding and will have a high boiling points. Propanol 1-2.5 -Polar -Tetrahedral -Because of the two lone pairs of oxygen, and its high electronegativity between hydrogen and carbon atoms, attraction will be lead to him and become negatively charged, while hydrogen with the lower electronegativity will lose electrons easier and become positively charged; having a polarity in charges. However charges are balanced with the big positive charge, having a polar stream but no to strong to deflect it enough as shown. Propanone 2-3 -Polar -Tetrahedral -The electrons in both bonds are strongly attracted to the more electronegative oxygen atom than the less electronegative carbon. ...read more.

Hand C atoms bonded with O will exert a force towards him, and b cause of its lower electronegativity a positive charge, leading to a giant polarity in the molecule. Distilled water 3-4 -Polar -Linear bent -The stream had almost a big deflection caused by the only most electronegative O atom, with two pair of lone pairs, having a big negative centre, while it is shared two H, which are less electronegative and have positive charges, forming a big polarity shown on the deflection. Approximate decreasing polarity of liquids: � Ethanoic acid � Ethane-1,2-diol � Distilled water � Propanone � Ethanol � Ethyl acetate � Propanol � Heptane Evaluation Limitations Improvements � Deflection � Students were observing the stream or jet deflection as it was falling instead of the displacement that the stream made over the liquid, as it fell which was easier to observe and analyze the respective deflection. � While observing the deflection over the liquid in the beaker, it still ended hard to see the deflection as the liquid made a displacement over it; for a exact results we shall put some scale (cm) ...read more.

to cancel each other. In the other hand, when compounds are polar is in cause of the unequal sharing because elements have greater electron affinity/ electro negativity than others gain attraction between their bonds and electrons. In this experiment we see how the rest of the liquids contain Oxygen atoms, mostly with its lone pairs, and high elecrtonegatiity, which made the atoms slightly negative charged; even as, Hydrogen and Carbon atoms with lower electronegativity than O creating a positive charge. So, when the ruler with the negative charge was getting closer into the jet of each liquid, they changed position and exerted a turning effect, so that the negative charges (oxygen in compounds, and rubbing ruler/rod) wouldn't repel with each other and therefore the positive charges lined up and create an effect of attraction with the negative charge of ruler, called a dipole moment. The polarity ranking of functional groups says that acids are the second ones most polar after amides , which explains that these compounds places this polarity because of H bonding and the presence of two O atoms. So it explains the rank of Ethanoic acid as the most polar of all. ?? ?? ?? ?? Testing liquids for polarity ...read more.