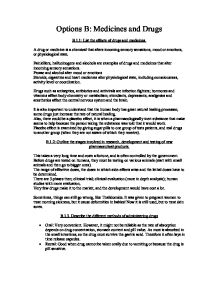 Options B: Medicines and Drugs B.1.1: List the effects of drugs and medicines. A drug or medicine is a chemical that alters incoming sensory sensations, mood or emotions, or physiological state. Painkillers, hallucinogens and alcohols are examples of drugs and medicines that alter incoming sensory sensations. Prozac and alcohol alter mood or emotions Steroids, cigarettes and heart medicines alter physiological state, including consciousness, activity level or coordination. Drugs such as antiseptics, antibiotics and antivirals are infection fighters; hormones and vitamins affect body chemistry or metabolism; stimulants, depressants, analgesics and anesthetics affect the central nervous system and the brain. It is also important to understand that the human body has great natural healing processes; some drugs just increase the rate of natural healing. Also, there could be a placebo effect, it is when a pharmacologically inert substance that make seems to help because the person taking the substance was told that it would work. Placebo effect is examined by giving sugar pills to one group of tests patients, and real drugs to another group (when they are not aware of which they receive). B.1.2: Outline the stages involved in research, development and testing of new pharmaceutical products. This takes a very long time and costs a fortune, and is often controlled by the government. Before drugs are tested on humans, they must be testing on various animals (start with small animals and then go to bigger ones). The range of effective doses, the doses in which side-effects arise and the lethal doses have to be determined. There are 3 phases then; clinical trial; clinical evaluation (more in depth analysis); human studies with more evaluation, Very few drugs make it to the market, and the development would have cost a lot. Sometimes, things can still go wrong, like Thalidomide. It was given to pregnant women to treat morning sickness, but it cause deformities in babies! ...read more.

List other commonly used depressants and describe their structures. Valium (diazepam) is a tranquilizer, Mogadon (Nitrazepam) is a hypnotic drug (used to control seizures and infantile spasms), Prozac (hydrochloride) is an anti-depressant drug used to treat mental depression. Diazepam and Nitrazepam have similar carbon skeletons meanwhile Prozac is different. B.5.1. List the physiological effects of stimulants. Stimulants are chemicals that stimulate the brain and the central nervous system. It is the opposite of a depressant. These increase alertness. Examples are amphetamine, nicotine and caffeine. B.5.2. Compare amphetamines and adrenaline They both derive from the phenylethylamine structure, and therefore look similar. Furthermore, amphetamines mimic the effects of adrenaline (they are sympathomimetic drugs), as they constrict arteries and thus increases sweat production. They increase heart rate, blood pressure, respiration and insomnia. Medical uses: Treat mild depression, narcolepsy and asthma. They use up the body's reserve energy and can lead to a collapse. B.5.3 Discuss the short- and long-term effects of nicotine consumption. Tobacco is a source of nicotine which is a mild stimulant with a short lived effect. The response is followed by depression and thereby makes one pushed to use it more often. Short-term: Increase in heart-rate and blood pressure. It constricts blood vessels and therefore strains the heart. Nicotine also reduces urine output. Long term effects of nicotine: It stresses hard and may lead to heart diseases and blood clot; May lead to increase of fatty acids in the blood. Smoking leads to more carbon monoxide in the blood making the blood less able to carry blood. It also increases the gastric acid production and may lead to ulcer. Smoking causes: Cancer in lungs and mouth; heart and blood vessel disease; breathing difficulties and chronic bronchitis; air pollution; fires; bad teeth; insomnia. B.5.4. Describe the effects of caffeine and compare its structure with that of nicotine. Caffeine stimulates the respiratory system (more energy is available from respiration), so heart and brain gets more energy. ...read more.

It is important to have enough oxygen in the anaesthetic mixture so that the patient can live. At least 20% oxygen is needed B.10.1 Describe the effects of lysergic acid diethylamide (LSD), mescaline, psilocybin and tetrahydrocannabinol. Psychadelic drugs like these alter the mind and produces a change in thought, perception or mood and induce vivid fantasies. Colors seem more brilliant for the user. There are the effects of the mentioned mind altering drugs: LSD: This is a powerful hallucinogen that strongly magnifies perception and may destroy the sense of judgment. No physical addiction, and not very strong psychological dependence. Mescaline: Color hallucinations which last 12 hours. Psilocybin: Similar to LSD, especially at high doses, but at low doses produces relaxation. Shortlasting; 4 hours THC: Milder drug similar to alcohol. At larger doses, changes in perception occurs - sees bright colors and gets sharper hearing. May get extreme anxiety, depression, uneasiness, panic attacks etc. There is no tolerance, but could lead to psychological dependence. B.10.2 Discuss the structural similarities and differences between LSD, mescaline and psilocybin. LSD and psilocybin both have the Indole ring (Heterocyclic amine compound where the nitrogen atom is part of a ring). However, mescaline includes the benzene ring but not the indole ring; it does have a primary amine. Serotonin also has the indole ring. B.10.3 Discuss the arguments for and against the legalization of cannabis. Cannabis offers relief from symptoms from AIDS, cancer and glaucoma. Marijuana may increase the appetite, and relieves nausea. Cannabis helps terminally ill patients to relieve tension and anxiety. Marijuana relieves pressure inside the eyeball for glaucoma patients. However there are many bad sides to it too. Smoking marijuana may lead to lung problems and may suppress the immune system. It might lead to decreased fertility for men and cause brain damage and birth defects. Users may also start using harder drugs too. Users of prohibited drugs need to obtain it from criminal sources and may therefore be forced into crime to support their habit. It damages the society a lot. ...read more.