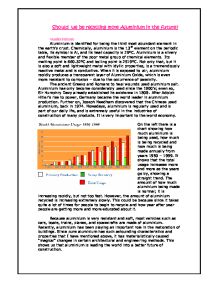 Should we be recycling more alluminium in the future?

Should we be recycling more Aluminium in the future? Main Ideas Aluminium is identified for being the third most abundant element in the earth's crust. Chemically, aluminium is the 13th element on the periodic table, its symbol is Al, and its heat capacity is 25�C. Aluminium is a silvery and flexible member of the poor metal group of chemical elements. Its melting point is 660.32�C and boiling point is 2519�C. Not only that, but it is also a soft and lightweight metal with idyllic properties, is a tremendously reactive metal and is conductive. When it is exposed to air, aluminium rapidly produces a transparent layer of Aluminium Oxide, which is even more resistant to corrosion - due to the occurrence of passivity. The ancient Greeks and Romans to heal wounds used aluminium salt. Aluminium has only become considerably used since the 1900's; even so, Sir Humphry Davy already established its existence in 1808. After Adolph Hitler's rise to power, Germany became the world leader in aluminium production. Further on, Joseph Needham discovered that the Chinese used aluminium, back in 1974. Nowadays, aluminium is regularly used and is part of our daily life, and is extremely useful in the industries of construction of many products. It is very important to the world economy. On the left there is a chart showing how much aluminium is being used, how much is being recycled and how much is being made annually from years 1950 - 1999. ...read more.

It also helps save energy bills. - Aluminium in packaging: Aluminium is used for protection and preparation to store foods and drinks. This packages are very reliable because that are hygienic, easy to open, and recyclable. - Aluminium in Rail & Sea transport: The most modern subway cars and ferries are made up of aluminium. - Aluminium in the air: A space shuttle that was built in the USA is 90% aluminium. Positive and negative effects of recycling aluminium on the environment: Positive aspects: - By recycling aluminium we save about 95% of the energy that would be used for the next badge of aluminium. - Recycling aluminium is 100% efficient. - It saves lots of energy and money. - Because recycling reduces pollution, by avoiding the first production of aluminium, we are keeping the environment safe from being damaged by the effects of aluminium. - Over 11 million tonnes of old and new scrap were recycled globally in 1998. - Conserves raw materials. - Because it creates less pollution if you recycle, then fewer greenhouse gases are released so not only is the not much of a climate change but neither is there a decrease in the ozone layer. Negative aspects: - As aluminium is being extracted, chemical gases are being let out to the air; green house gases are released. - Damages on the scenery. - More unemployment for workers in the aluminium industry. Here are two images of a regular bauxite mine, before and after. ...read more.

Many people were thrilled, and others weren't. They were thrilled because it was a new source of communication between other countries - it created a better bond with them, making it easier to travel. However, some people aren't thrilled, because if we didn't fly by origin, as individuals, then it's a sign that it's what God intended us not to do, and it would be like breaking a silent rule. Just like with aluminium, just as the questions arises; it creates a disagreement between perceptive. Some people might think that we are adding too much of an interference of technology to the nature of science - therefore, not letting science take its natural course. Conclusion: In conclusion, I feel that I have been able to send a message that not everyone feels the same way about aluminium, and it ha everything to do with perceptive. Overall, I think that before coming to a steady conclusion, we should take a look around us, at the cultures, the traditions, the different opinions, the environment, and take in consideration all that will be affected by this decision. Personally, I think that recycling aluminium is the solution. Despite the disadvantages and the moral and ethical implications, if we recycle it is more environmental-friendly, gives more money, more energy, and more efficiency. Even so, if we were to commence with this decision, there would be many conflicts and strikes with aluminium factory owners, so it shows that no matter what decision we make, we can never be completely impartial, nor can we satisfy everyone's perceptive. ...read more.