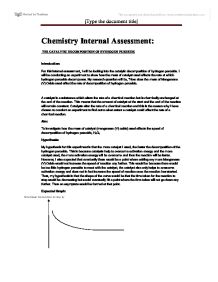 THE CATALYTIC DECOMPOSITION OF HYDROGEN PEROXIDE

oxide used. Another flaw is that I used very little hydrogen peroxide (10cm3). This is a very minute amount and this could also mean that the amount of catalyst needed to totally overcome activation energy is much less and thus I cannot conclude exactly what value of catalyst would cause a peak in the rate of decomposition. A solution for this is to use various values of hydrogen peroxide and find the average mass of catalyst added relative to volume of hydrogen peroxide used and I could then come up with a general equation to find the peak decomposition rates for specific volumes. The last flaw in my experiment, which I briefly mentioned in the conclusion, is the fact that I did not use enough variables for the mass of manganese (V) oxide. I only used values of 1 gram - 5 grams and thus I could not ascertain results for variables where the mass is more than that of 5 grams. Had I expanded my range from 5 grams to 10 grams, I could have a wider range of data and even might be able to achieve the perfectly straight line in my graph which I hypothesised. Thus, I can say that this experiment has many flaws and could be improved in many areas especially in data recording. ...read more.